Trinidad model—example to the world

Trinidad model—example to the world 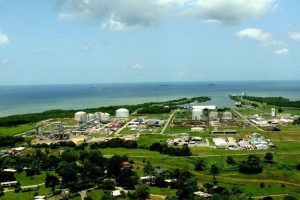 There were ideas, hopes, plenty of hard work, and a lot of mud to wade through as the western coastline of Central Trinidad, then known as Goodrich Bay, began the transformation from swamp to the massive industrial estate known to the world today.

Armed with three years of planning by the Co-ordinating Task Force, the first National Energy Corporation team under Chief Executive Officer Eldon Warner got down to the challenge of changing the economic future of Trinidad and Tobago.

To them fell the historic challenge of monetising the country’s under-exploited natural gas resources by laying down the industrial infrastructure and building out an economic future grounded in gas-based industries.

The investment was as huge as the risk.

For over 70 years until then, T&T had earned its revenues as an exporter of oil. Now, it was putting everything into breaking away from that past in opening up new and uncharted horizons downstream of gas. For a small country, the investment in infrastructure alone was almost prohibitive.

By the early 1980s, however, skepticism was giving way to admiration as the first wave of plants began to rise into the skyline above the Point Lisas Industrial Estate:

During the recession years of the late 1980s, a policy shift led to an increased private sector stake in the country’s gas-based future.

Soon, the miracle of Point Lisas was winning public support and opening up capacity and opportunity throughout the country.

T&T gas-based industrial development programme is today recognised throughout the world as “The Trinidad Model”. Its success brings a steady stream of policymakers from the Caricom region and as far afield as Africa and elsewhere who are searching for a template in the hope of replicating this country’s energy experience in their own countries.

The most recent to visit were the Presidents of Guyana and Suriname, Dr Irfaan Ali and Chan Santokhi respectively, during their visit here for the Agri-Investment Forum and Expo. Today, the Prime Minister of Jamaica, Andrew Holness, is also expected to make the trek to Point Lisas.

Many of these countries, including T&T up to the point of developing the Point Lisas estate, benefit from royalties and taxes paid by foreign multi-national corporations who extract their natural resources, mostly for export.

In T&T, most people of a certain age would remember the flared flames perennially issuing from chimney stacks at the Pointe-a-Pierre oil refinery as gas, a by-product of oil, was burnt off.

Today, not only is gas no longer burnt into the atmosphere but every cubic foot gas is valued for its use in supplying the country with electricity, powering industries, attracting foreign investment and earning much-needed foreign exchange.

Gas-based industries was the limb that the T&T economy grew as its oil fields began to mature and go into decline. In response to this, T&T successfully made the transition from an oil to a gas-based economy in the 1990s.

Today, as climate change confronts the world with the urgent challenge of dramatically reducing carbon emissions, the cleaner fuel of natural gas partly cushions the economy while it embarks on the mission of expanding its output of renewable energy through solar and, possibly, green hydrogen.