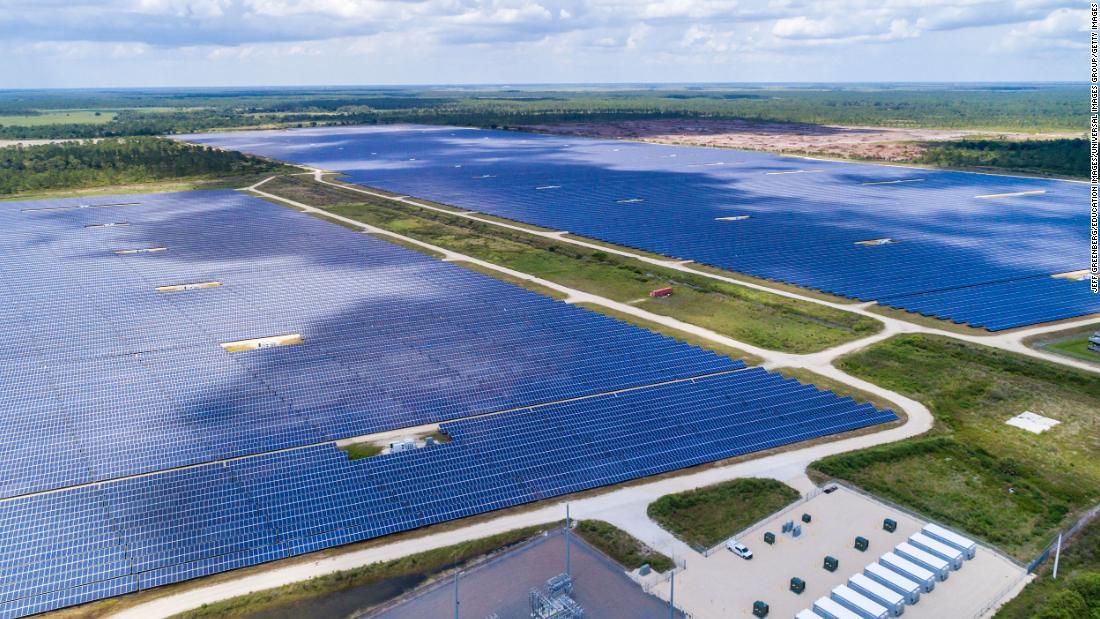 The Babcock Ranch solar array, which is run by Florida Power and Light.

(CNN)Anthony Grande moved away from Fort Myers three years ago in large part because of the hurricane risk. He has lived in southwest Florida for nearly 19 years, had experienced Hurricanes Charley in 2004 and Irma in 2017 and saw what stronger storms could do to the coast.

Grande told CNN he wanted to find a new home where developers prioritized climate resiliency in a state that is increasingly vulnerable to record-breaking storm surge, catastrophic wind and historic rainfall.

What he found was Babcock Ranch — only 12 miles northeast of Fort Myers, yet seemingly light years away.

Hurricane Ian has devastated the Fort Myers area. Some people floated on freezers to escape

Babcock Ranch calls itself “America’s first solar-powered town.” Its nearby solar array — made up of 700,000 individual panels — generates more electricity than the 2,000-home neighborhood uses, in a state where most electricity is generated by burning natural gas, a planet-warming fossil fuel.

The streets in this meticulously planned neighborhood were designed to flood so houses don’t. Native landscaping along roads helps control storm water. Power and internet lines are buried to avoid wind damage. This is all in addition to being built to Florida’s robust building codes.

Some residents, like Grande, installed more solar panels on their roofs and added battery systems as an extra layer of protection from power outages. Many drive electric vehicles, taking full advantage of solar energy in the Sunshine State.

Climate resiliency was built into the fabric of the town with stronger storms in mind.

So when Hurricane Ian came barreling toward southwest Florida this week, it was a true test for the community. The storm obliterated the nearby Fort Myers and Naples areas with record-breaking surge and winds over 100 mph. It knocked out power to more than 2.6 million customers in the state, including 90% of Charlotte County.

But the lights stayed on in Babcock Ranch.

“It certainly exceeded our expectations of a major hurricane,” Grande, 58, told CNN. 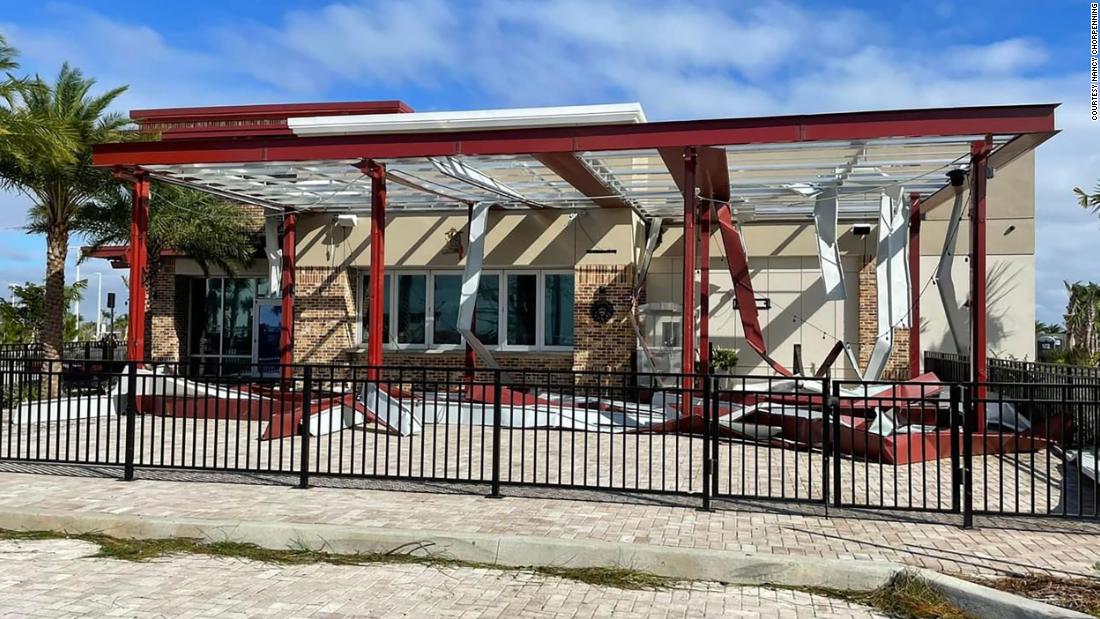 A damaged building is seen in Babcock Ranch after Hurricane Ian. 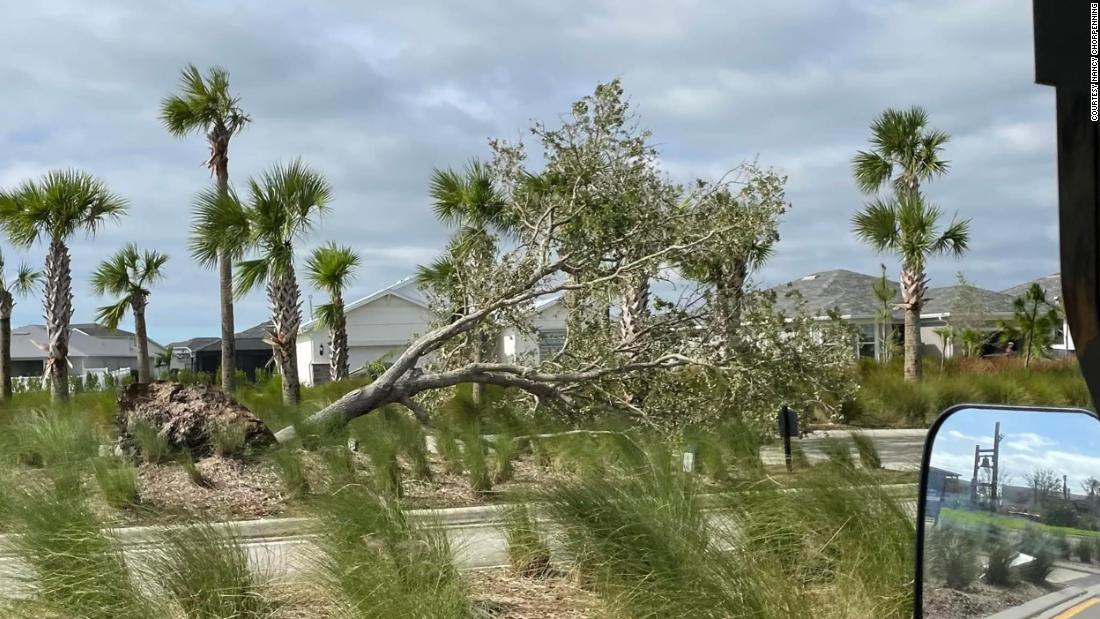 An uprooted tree in Babcock Ranch after Hurricane Ian.

The storm uprooted trees and tore shingles from roofs, but other than that Grande said there is no major damage. Its residents say Babcock Ranch is proof that an eco-conscious and solar-powered town can withstand the wrath of a near-Category 5 storm.

“We have proof of the case now because [the hurricane] came right over us,” Nancy Chorpenning, a 68-year-old Babcock Ranch resident, told CNN. “We have water, electricity, internet — and we may be the only people in Southwest Florida who are that fortunate.”

Grande said Hurricane Ian came through southwest Florida “like a freight train.” But he wasn’t afraid that he would lose everything in a storm, like he was when he lived in Fort Myers.

“We’re very, very blessed and fortunate to not be experiencing what they’re experiencing now in Sanibel Island and Fort Myers Beach,” Grande said. “In the times that we’re living in right now with climate change, the beach is not the place to live or have a business.”

Solar success
Syd Kitson, a former professional football player for the Green Bay Packers and Dallas Cowboys, is the mastermind behind Babcock Ranch. Kitson envisioned it to be an eco-conscious and innovative neighborhood that is safe and resilient from storms like Ian.

The ranch broke ground in 2015 with the construction of the solar array — which was built and is run by Florida Power and Light — and its first residents moved into the town in 2018. Since then, the array has doubled in size and thousands of people have made Babcock their home. 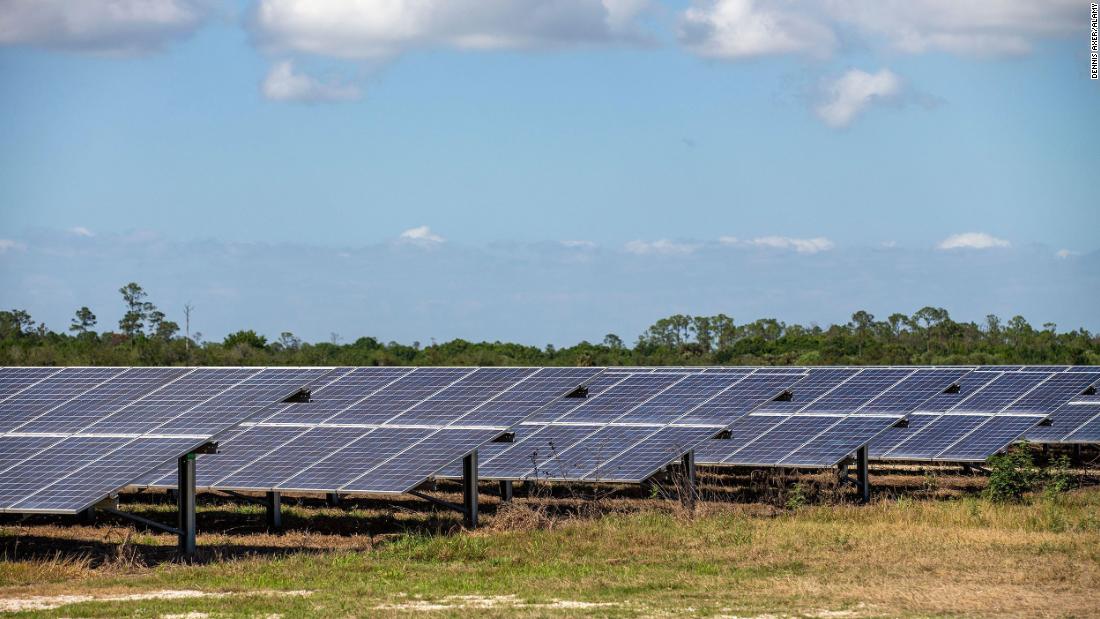 “It’s a great case study to show that it can be done right, if you build in the right place and do it the right way,” said Lisa Hall, a spokesperson for Kitson, who also lives in Babcock Ranch.

“Throughout all this, there’s just so many people saying, ‘it worked, that this was the vision, this is the reason we moved here,'” Hall told CNN.

Perhaps the highest endorsement for the city is that it is now a refuge for some of Ian’s hardest-hit victims. The state opened Babcock Neighborhood School as an official shelter, even though it didn’t have the mandated generator. The solar array kept the lights on. 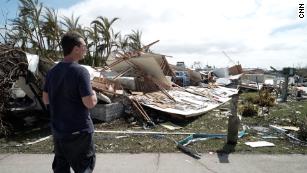 Hurricane-ravaged Sanibel Island ‘is cut off from the world right now’.

Some of Chorpenning’s friends who live on Sanibel Island — which is now cut off from the mainland after Ian’s devastating storm surge severed the causeway — came to shelter at a friend’s house at Babcock Ranch. It will be a while before they can go back, she said.

“They’re going to be renting a place over here for a while, while they figure out what’s going to happen out there,” she said. “I joked that we may be the only people in southwest Florida whose property value just increased.”

Even Kitson chose to ride out the storm in Babcock to see how the community would fare in the hurricane. Kitson declined CNN’s request for an interview; Hall said he is focused on helping neighboring communities rebuild.

“He was there during the storm; he said, ‘where else would I be?'” Hall said. “We built it to be resilient and as much as you plan and think you’ve done the right thing, you don’t know until you put it to the test.” 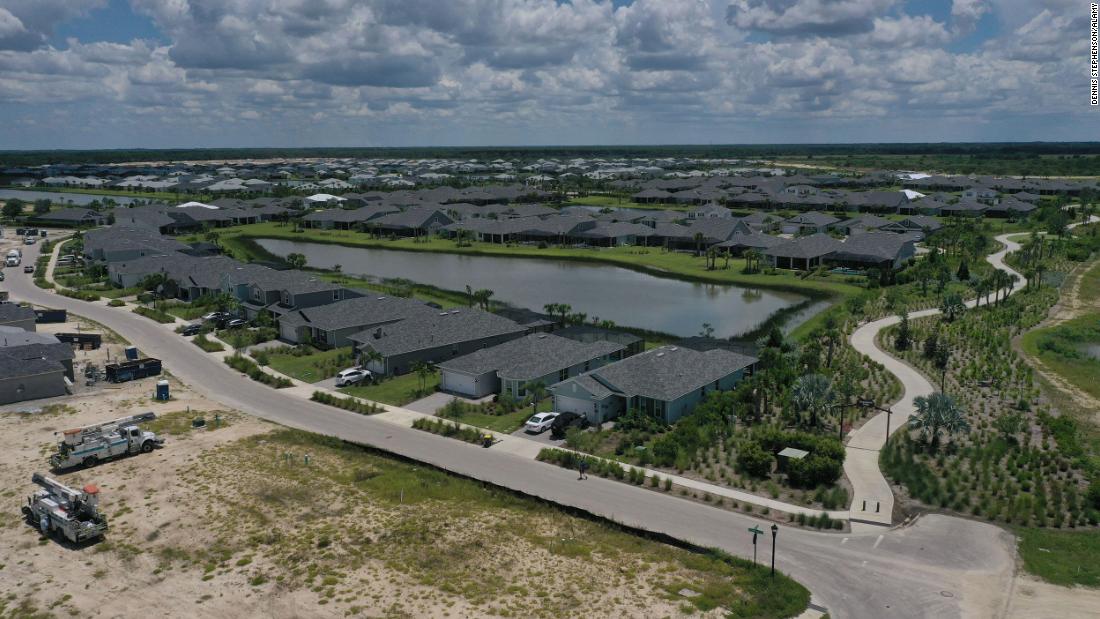 Babcock Ranch has sold more than 2,000 homes, according to the neighborhood’s website.

As utilities scramble to restore power across the state, Babcock residents say September storms showed that America’s energy infrastructure is not well-equipped to handle worsening extreme weather events. Hurricane Fiona ravaged Puerto Rico’s power grid when it made landfall there on September 18. Now, Ian has left millions of people in the dark in Florida.

Babcock residents say their neighborhood is a model for urban development in a climate change-ravaged future.

“It’s not what it was 20 or 25 years ago; the storms are getting bigger and bigger, and it’s no surprise, because the warnings have all been there,” Grande said. “I think Babcock Ranch’s future has gotten even brighter.”