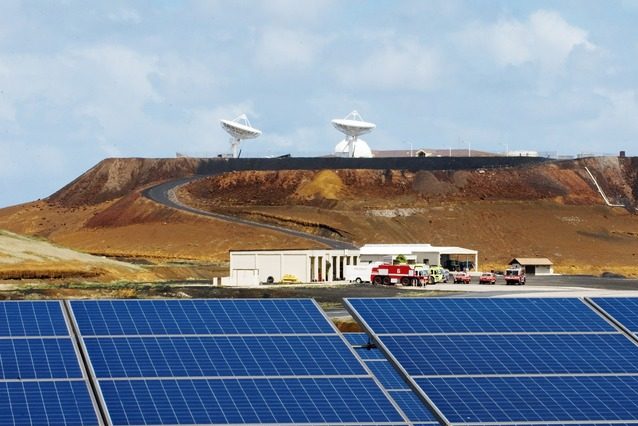 Best Practices for Policymakers for Resilient Photovoltaic Systems for Islands

July 14, 2020  |  By: Laurie Stone, Rocky Mountain Institute
As the intensity and frequency of hurricanes and typhoons increase, islands—which contribute little to climate change—are suffering disproportionate damage to their energy infrastructure and economies, and thus their people’s health and wellbeing. The COVID-19 pandemic has only served to exacerbate this disparity as island economies suffer greatly from the lack of tourism and health impacts of the pandemic.

Many Small Island Developing States (SIDS) are primarily dependent on power generated centrally by fuel oil or diesel-fired generators and distributed across the island by overhead transmission lines, making them more susceptible to fuel price volatility and disruption in supply. When the electric grid goes down, all aspects of life from health care services to education and economic development are disrupted.

Fortunately, in recent years, electricity on SIDS has been supplemented in homes and businesses by solar photovoltaics (PV). PV systems provide a more resilient source of electricity, helping islands reduce their dependency on imported fossil fuels and supporting their goals on climate change adaptation and mitigation. In fact, over half of Caribbean islands’ electric utilities already own or operate solar PV as part of their generation mix, with more than 571 MW of solar installed across rooftops, parking canopies, and vacant land.

However, these PV systems are useless if they fail. RMI, The Clinton Foundation, and The United Nations Office of the High Representative for the Least Developed Countries, Landlocked Developing Countries and Small Island Developing States recent Solar Under Storm for Policymakers report lays out guidelines for governments, regulators, and developers interested in improving solar PV system survivability to intense wind-loading events.

Cyclonic events around the globe in 2017 were some of the most destructive in history. Hurricanes Harvey, Irma, and Maria brought widespread destruction throughout the Caribbean, causing thousands of deaths and more than US$100 billion in economic costs, both of which were exacerbated by loss of power. Many communities spent months—and in the case of Puerto Rico, more than a year—living without electricity-dependent services and infrastructure that keep their communities functioning such as water supply, hospitals, schools, banks, grocery stores, cell phone towers, airports, and seaports.

In 2018, Cyclone Gita hit the Pacific islands of Vanuatu, Fiji, Wallis and Futuna, Samoa, American Samoa, Niue, and Tonga. In Tonga, Gita left more than 80 percent of the homes without power, and economic damages totaled US$164 million, 40 percent of the island’s GDP. And the 2018–2019 Southwest Indian Ocean cyclone season was the costliest and deadliest cyclone season recorded in the region in decades. Cyclone Gelena destroyed 90 percent of the electricity grid on Rodrigues Island, causing an estimated US$1 million in damage.

This trend will only continue to worsen. Colorado State University, one of the top seasonal hurricane forecasters in the United States, has predicted that the 2020 hurricane activity will be approximately 150 percent more than the average season.

Benefits of Solar for SIDS

Solar energy is cost-competitive with and at times even cheaper than traditional fossil fuel generation. Furthermore, solar energy can enhance resilience of island electricity systems to both economic and climate shocks due to its ability to reduce dependence on imported fuels.

Solar energy can also increase resilience. Depending on centralized generation can mean an entire island goes dark when the grid goes down during a disaster event. Without power available to critical facilities—including hospitals, fire and rescue, and other community facilities—many lives can be lost. Solar PV is a decentralized form of power that can isolate from the grid, so the lights can stay on when the central grid is down.

Transitioning to renewables is especially important to SIDS in recovering from the economic toll that the COVID-19 pandemic has taken on island nations around the world due to their heavy dependence on tourism. Renewable energy growth can lead to job creation in the construction sector and access to reliable and affordable energy can increase income-generating opportunities as well as provide a platform for new electricity-reliant industries.

Finally, solar energy can help SIDS reach their ambitious climate goals. For example, Latin America and the Caribbean have a regional initiative to install 312 GW of renewables by 2030, reaching at least 70 percent of their electricity needs. And several islands in the Caribbean—including Aruba, Dominica, Grenada, Puerto Rico, and Montserrat—have 100 percent renewable energy goals. In the Pacific, seven islands have declared 100 percent renewable energy targets: The Cook Islands, Niue, Tuvalu, Fiji, Vanuatu, and the Solomon Islands.

While solar PV systems can be more resilient than traditional oil and gas-powered generation during extreme weather events, the systems must incorporate the best available engineering, design, construction, and operational practices to increase the reliability and survival rates from extreme winds and storms.

Despite the recorded sustained wind speeds of over 180 miles (290 kilometers) per hour throughout the 2017 hurricane season in the Caribbean, many solar PV systems survived while others suffered major damage or complete failure with airborne solar modules, broken equipment, and twisted metal racking.

Following hurricanes Harvey, Irma, Maria, and more recently Dorian, Rocky Mountain Institute (RMI) and Clinton Climate Initiative (CCI) sent teams to the Caribbean to evaluate the root failures of solar PV systems and key success factors of systems that survived. The teams then developed a list of recommendations to increase system resilience. The recommendations are a crucial resource to increase the survival of PV systems and the resilience of the grid during extreme weather events.

One of the most important recommendations is to ensure inclusive multi-stakeholder collaboration. This entails communicating clear market signals to suppliers and upstream equipment providers and coordinating closely among practitioners and installers. In addition to collaboration, codes and regulations should be amended and performance standards created or revised for procurement. 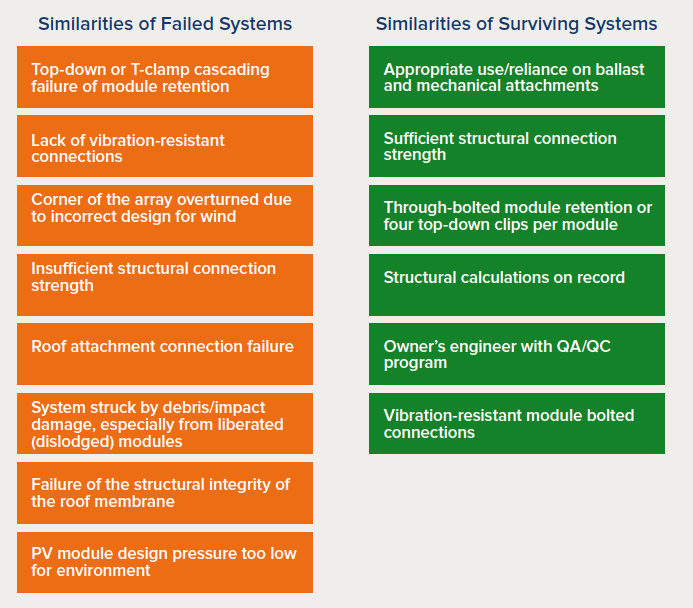 The Additional Cost for Resilience

Calculating the additional cost to implement the recommendations outlined in the report depends on the specific projects and the sites and/or roofs. RMI estimates concluded that incorporating Category 5 resilient considerations in solar PV projects, on average, would incur an increase of approximately 5 percent in engineering, procurement, and construction costs versus the current industry standard Category 3 or 4 rated solar PV installation considerations. These additional costs come in the form of labor for the extra time needed to fasten modules and install more connections.

When considering lifetime costs (25 years), the additional mitigation costs for resilience have proven to be money well spent for those exposed to hurricanes, typhoons, and other high-wind events.

Resilient and Reliable Power for Decades

The Solar Under Storm for Policymakers report is a follow up to two reports on best practices for engineering professionals responsible for solar PV system design, solar PV system specifications, and/or solar PV system construction oversight and approval. Our hope is that by sharing best practices and through continued collaboration with designers, suppliers, manufacturers, and policymakers, we can increase the reliability and survival rates of PV systems in hurricanes, and ensure that the people of Small Island Developing States have resilient and reliable power for their grids, homes, businesses, and critical facilities for decades to come.