Renewables met all of the rise in global electricity demand in the first half of 2022, preventing any growth in coal and gas generation, according to a new report published by London-based energy think tank Ember.

The rise in wind and solar generation met over 75% of the demand growth in the first half of 2022, while hydro met the remainder, preventing a possible 4% increase in fossil-fuel generation and avoiding $40 billion in fuel costs and 230 Mt CO2 in emissions.

Wind and solar are proving themselves during the energy crisis.

The first step to ending the grip of expensive and polluting fossil fuels is to build enough clean power to meet the world’s growing appetite for electricity. 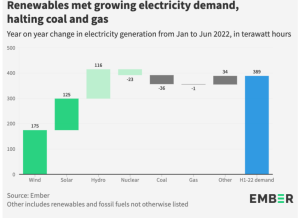 The report analyzes electricity data from 75 countries representing 90% of global electricity demand. It compares the first six months of 2022 to the first half of 2021 to show how the electricity transition has progressed.

The report finds that global electricity demand grew by 389 terawatt hours (TWh) in the first half of 2022. Renewables – wind, solar, and hydro – increased by 416 TWh, slightly exceeding the rise in electricity demand.

As a result of the growth in renewables, fossil-fuel generation was almost unchanged (+5 TWh, +0.1%). Coal fell by 36 TWh (-1%) and gas by 1 TWh (-0.05%). This offset a slight rise in other fossil fuels (mainly oil) of 42 TWh. Consequently, global CO2 power sector emissions were unchanged in the first half of 2022 compared to the same period last year, despite the rise in electricity demand.

Coal in the EU rose 15% only to cover a temporary shortfall in nuclear and hydro generation. Coal in India rose 10% because of a sharp rebound in electricity demand from lows early last year when the pandemic struck hardest. Globally, these rises were offset by coal-power falls of 3% in China and 7% in the United States.

Despite the halt in fossil-fuel generation in the first half of 2022, coal and gas generation increased in July and August. It leaves open the possibility that power sector emissions in 2022 may yet rise, following last year’s all-time high.

These conversions are proceeding despite data showing that gas projects are increasingly uncompetitive with renewables and are just as bad, if not worse, for the environment than coal.

We can’t be sure if we’ve reached peak coal and gas in the power sector.

Global power sector emissions are still pushing all-time highs when they need to be falling very quickly. And the same fossil fuels pushing us into a climate crisis are also causing the global energy crisis. We have a solution: Wind and solar are homegrown and cheap, and are already cutting both bills and emissions fast.