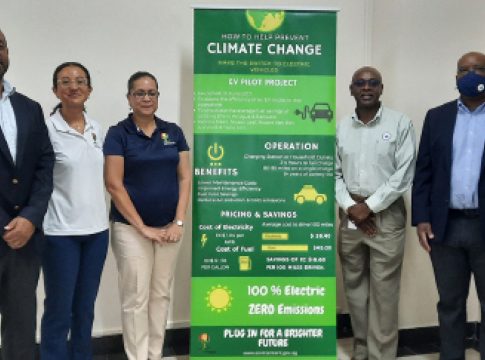 Select bus and taxi drivers will be given the opportunity to operate an electric vehicle with the launch of the Department of the Environment’s (DOE) second electronic mobility project.

The Sustainable Low-Emissions Island Mobility (SLIM) project is aimed at promoting low greenhouse gas emissions and climate resilience for the private and public transportation sector in Antigua and Barbuda.

Speaking during Thursday’s launch, Project Coordinator Melissa Le Blanc explained that the SLIM project is a step up from the Italian School Bus project that concluded last August that included the addition of two new electric buses to the National School Bus System.

“Similar to that one, we will be procuring electric buses and electric taxis, what’s different this time, is that it is going to be integrated into the public bus fleet and the taxi fleet at the V. C Bird International Airport,”

“This is important because we want our drivers as well as people who use their vehicles to become familiar with the technology.  In data collection and surveys that we would have done within this year we realised that while we are familiar with the electric cars the wider population has not experienced it,” La Blanc.

Along with the new fleet of vehicles, the DOE will be installing solar powered charging stations, one for the West Bus Station Terminal and the other at the airport.

“Through this entire process we have engaged with the West Indies Oil Company Limited (WIOC) and they have expressed an interest in partnering with us for this project so that they could be a part of the transition going forward.”

The officials at the Antigua Public Utilities Authority (APUA) and public and private players in the transportation sector will also be consulted throughout the duration of the four-year project.

La Blanc also spoke to another component of the project as it relates to financing for individuals wishing to purchase their own electric vehicles.

“We are also going to be creating a finance window within the department. It’s approximately US$650,000 so that local taxi drivers and other interested persons can apply to the fund to get their own electric vehicle. If everybody were to get a new car, that’s at least 10 vehicles, if we are thinking about incorporating second-hand vehicles, that could be upwards of 20 electric vehicles that would be in Antigua,” La Blanc said.