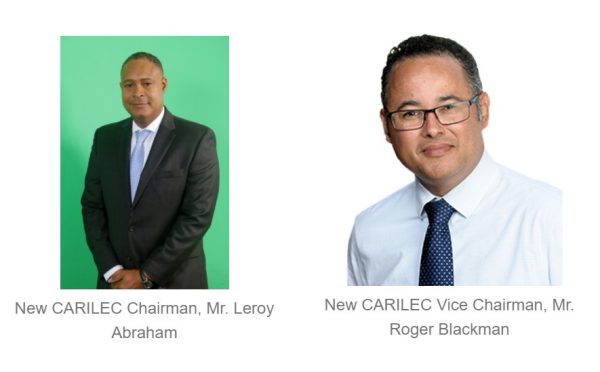 Castries, St. Lucia, January 7th, 2021: CARILEC’s Board of Directors has recently appointed a new Chairman in the person of Mr. Leroy Abraham, General Manager of the British Virgin Islands Electricity Corporation (BVIEC).  Mr. Abraham had previously served as the Board’s Vice Chairman.  This post has now been assumed by Mr. Roger Blackman, Managing Director of Barbados Light & Power Limited (BL&P).  These hierarchical adjustments to the CARILEC Board of Directors were prompted by the retirement the Board’s previous Chairman, Mr. Eddinton Powell, which took effect on December 31st, 2020.  The Association’s next Annual General Meeting (AGM) is scheduled for May 2021.

Mr. Eddinton Powell was elected as Chairman of CARILEC’s Board of Directors on May 23rd, 2019, at the Association’s (thirty-first) 31st AGM, held in St. Lucia.  Mr. Powell succeeded Mr. Jeffrey Locke, then Chief Executive Officer (CEO) of Belize Electricity Limited (BEL), as Chairman of the Board.  He also served as CARILEC’s Vice Chairman, Chairman of CARILEC’s Audit and Risk Committee, and a member of the Executive Committee of the Board, during the 2016 to 2019 term.  On the Utility front, Mr. Powell began his career in 1982, serving as the Chief Financial Officer (CFO) and Senior Vice President of the Caribbean Utilities Company Limited (CUC), during this last four (4) years with the Utility.  Mr. Powell subsequently joined FortisTCI as President and CEO in 2007, serving in those roles for the past thirteen (13) years.

Needless to mention, Mr. Powell is regarded as a stalwart of the Caribbean energy community and the CARILEC Secretariat is honored to have had him serve as our Chairman.  His contribution to the growth and development of the Secretariat and the Caribbean utility and energy sector at large, will transcend throughout the Association and the wider sector for decades to come.  CARILEC’s Board of Directors, management, staff, members, and partners all wish Mr. Powell a restful and enjoyable retirement.