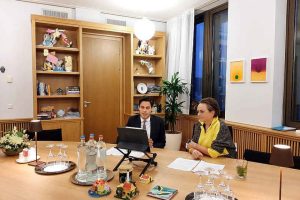 Minister of Economic Affairs Rob Jetten and State Secretary of Kingdom Relations and Digitisation Alexandra van Huffelen made the announcement during a digital press conference on Wednesday, in the presence of government officials of Bonaire, St. Eustatius and Saba.  The three islands will each receive about US $10 million for investments in renewable energy. St. Eustatius will build a third solar park, while for Saba the construction of a wind turbine is planned. Bonaire is looking at a combination of wind and solar energy.

“We are well ahead with our plans for renewable energy,” said Saba Commissioner Bruce Zagers, who called the announcement of the investment by the Ministry of Economic Affairs and Climate EZK “very good news”.

“It shows commitment. We are in this together and we are taking the steps together,” said Zagers, adding that renewable energy fits in with Saba’s ambition of being more self-sustainable and a green destination. With the investment in renewable energy, Saba will go from the current 40% of electricity being generated in a renewable way through the solar parks, to 89% renewable energy.]

Zagers said the high cost of fuel, in the case of Saba, diesel fuel to run the generators, was a major problem which has contributed to an increase in the electricity price. He said that without the two solar parks next to the airport, the electricity price would have been much higher.

The $10-million investment will go a long way in reducing Saba’s dependency on expensive fuel and ultimately lower the energy price. “With this investment, we can make a true difference for the people,” said Zagers.

Statia’s Government Commissioner Alida Francis expressed her gratitude for the $10-million investment. “This comes at a right time,” she said, referring to the current high energy price. She explained that the funds would be used to expand the solar parks of St. Eustatius Utilities Company STUCO. Together with the $1.5 million own contribution of STUCO, a third solar park will be constructed. This will bring the total share of renewable energy in St. Eustatius to 60%.

“This is a significant increase and it will contribute to lower energy prices,” said Francis, who explained that this was very important for the Statia people, who are faced with very high electricity bills and increasing poverty. She also mentioned the subsidy that The Hague provided to compensate the high electricity bill of low-income households.

Bonaire Commissioner Hennyson Thielman said he was very content with the allocation by the Ministry of EZK, because it meant that the first phase of the renewable energy project could start. “This is an important step in increasing sustainably generated energy. But reducing the cost of electricity in the long term is important as well,” he said.

“We are very happy; thank you,” said Bonaire Commissioner James Kroon. “We take climate change very seriously,” he said, noting that Bonaire has taken the initiative to set up a so-called Climate Table.