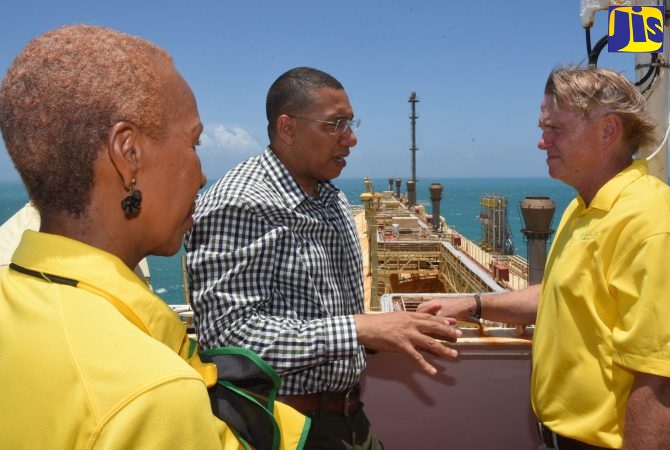 Prime Minister, the Most Hon. Andrew Holness, says the newly commissioned Floating Storage and Regasification Terminal, demonstrates that the country is conscious about protecting the environment, and is committed to reducing energy costs.

He also argues that this now establishes Jamaica as a premier liquified natural gas (LNG) hub.

Mr. Holness was speaking at a ceremony on Friday (July 19), to officially unveil the terminal at its location just off the coast of Old Harbour Bay, in St. Catherine. A large ship, called the Golar Freeze, is attached to the terminal, which is 3.6 miles out at sea.

The Prime Minister noted that this latest introduction of LNG supply in the country is in line with Jamaica’s energy policy, which calls for the development of its energy resource potential to enhance international competitiveness and energy security, whilst reducing carbon footprint.

“What I like about it is that it is more environmentally friendly, as it burns significantly cleaner than other oil-based fuels. Over the past decade, LNG has been approximately 30 per cent cheaper than diesel and projections are that it will continue to be cheaper than the distillate fuels,” Mr. Holness said.

Operated by global energy infrastructure company, New Fortress Energy, the terminal, which is the first of its kind in the Caribbean, will provide environmentally friendly, lower-cost fuel to several facilities, including the Jamaica Public Service’s (JPS) soon-to-be-completed 190 megawatt power plant in Old Harbour, through natural gas pipelines.

The Prime Minister pointed out that there are also plans to supply the Jamaica Urban Transit Company (JUTC) with the cleaner fuel, noting that in “the near future our buses could be using LNG.” This is to be realised under a pilot project with the JUTC to power five of its buses with natural gas.

He said that with this development, Jamaica is now “on track to achieve an ambitious goal which is to have at least 50 per cent of our electricity generation from renewables or cleaner fuels.”

Meanwhile, Minister of Science, Energy and Technology, Hon. Fayval Williams, said since its introduction, significant strides have been made with natural gas.

“Just as history was made when natural gas was introduced in Jamaica’s energy mix, in October of 2016, at the JPS Bogue power plant, this terminal signals another bold and significant step towards the creation of a modern, efficient, diversified environmentally sustainable energy sector,” she said.

For his part, Founder, Chairman and Chief Executive Officer (CEO) of New Fortress Energy, Wes Edens, said he is pleased that when the company came to Jamaica four and a half years ago, he found a country that “had the political will for the change that is necessary to switch from distillate fuels to a cleaner, brighter and more environmentally friendly future.”

New Fortress has invested close to US$1 billion to bring the LNG project to its current stage.

In the meantime, Opposition Spokesperson on Energy and Mining, Phillip Paulwell, who represented Leader of Opposition, Dr. Peter Phillips, also welcomed the new facility, noting that it “represents a statement of maturity, a statement in leadership,” because the LNG project spans administrations.

Jamaica’s transition to natural gas first started in 2016 with the building of New Fortress’state-of-the-artLNG terminal in Montego Bay, which converted the JPS 120-megawatt Bogue power plant from diesel to natural gas.

With the addition of the new Old Harbour Bay terminal, in another 12 months, Jamaica’s electricity will be mostly generated from clean natural gas and renewable energy.