Sharm el-Sheikh, Egypt / Abu Dhabi, UAE, 7 November 2022 – Renewables are the backbone of the energy transition and a viable climate solution. Yet out of the 183 parties to the Paris Agreement with renewable energy components in their Nationally Determined Commitments (NDCs), only 143 have quantified targets with the vast majority focusing on the power sector. Only 12 countries had committed to a percentage of renewables in their overall energy mixes.

Renewable Energy Targets in 2022: A guide to design, released by the International Renewable Energy Agency (IRENA) at the UN Climate Change Conference COP27, assesses the level of renewable energy ambition in national climate pledges and benchmarks targets against the global climate goal of limiting temperature rise to 1.5°C. It clearly shows the collective level of energy transition ambition to date is not enough despite the Glasgow Climate Pact to upgrade 2030 targets in national pledges.

IRENA’s Director-General Francesco La Camera said, “At a time when we desperately need to see rapid implementation, I call on world leaders to urgently close the renewable deployment gap in pursuit of resilience, energy security and inclusive economies. IRENA’s report is a warning to the international community telling them that renewables offer a readily achievable climate solution but require immediate action. Climate pledges must enhance ambition to unlock the full and untapped potential of renewables.”

“There is a need for real urgency. Despite some progress, the energy transition is far from being on track,” he added. “Any near-term shortfall in action will further reduce the chance of keeping 1.5°C within reach. Under the COP27 slogan ‘together for implementation’ we must move from promises to concrete solutions to benefit people and communities on the ground.”

IRENA’s World Energy Transitions Outlook sees half of the energy consumed in 2050 coming from electricity. 90 per cent of all decarbonisation will involve renewable energy through direct supply of low-cost power, efficiency, electrification, sustainable bioenergy and green hydrogen. However, achieving the 2050 climate target will depend on sufficient action by 2030.

IRENA’s new analysis finds that by 2030, countries are targeting to reach 5.4 terawatts (TW) of installed renewable power capacity. This would only be half of the 10.8 TW of installed capacity needed according to IRENA’s 1.5°C Scenario. To achieve net zero, the targeted renewable power capacity by 2030 would have to double compared to the level of ambition in current targets.

This is readily achievable today as current renewable power targets lag recent deployment levels, IRENA’s report finds. To achieve current targets by 2030, countries would need to add 2.3 TW of capacity, equivalent to average yearly additions of 259 gigawatts (GW) in the next nine years. This is below the actual installed capacity added in the past two years: in 2020 and 2021, despite the complications that resulted from the pandemic and consequent supply chain disruptions, the world added almost 261 GW each year. 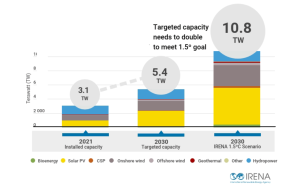 Furthermore, renewable power targeted by 2030 remains concentrated in a few regions globally. Asia makes up half of the global targeted capacity, followed by Europe and North America. In comparison, the Middle East and North Africa account for just 3 per cent of global deployment targets for 2030, despite the region’s high potential. And Sub-Saharan Africa accounts for just over 2 per cent of total global for 2030.

The countries targeting the highest level of deployment are all part of the G20, making up almost 90 per cent of the global aggregated target. Although they make up a small share of past renewable deployment, aggregated targets by least developed countries (LDCs) and small island developing states (SIDS) would double their current renewable capacity.

Read the full report: Renewable Energy Targets in 2022: A guide to design