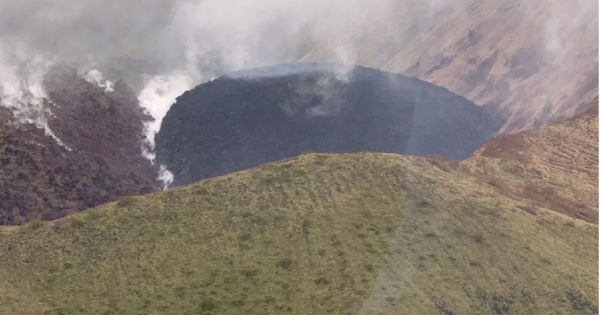 The new dome at the La Soufrière Volcano continues to grow with lateral spreading of approximately fifteen (15) metres towards the north-west and south-east.  The volcano also continues to produce visible gas and steam eruption, mostly at the contact areas between the pre-existing 1979 dome and the 2020-2021 dome, as well as the top of the new dome.  The alert level of the La Soufrière Volcano remains at Orange as the volcano continues to experience an effusive eruption, as magma is being exuded on the surface at extreme temperatures.

The University of the West Indies (UWI) Seismic Research Centre (SRC) has indicated that based on the complex patterns of previous eruptions, it is too early to conclude that the current activity would remain a simple dome extrusion event, as there is still a possibility of a shift to an explosive phase. The centre has also informed that a definitive prognosis on the current unrest episode cannot be provided until further data analysis is completed.  Satellite data obtained by various collaborating institutions confirm that the dome continues to grow.

To date, the UWI SRC team has informed that it is too premature to conclude that the current activity will remain a simple dome extrusion event, based on the complicated patterns of previous eruptions. Therefore, there is still a chance of a volcanic explosion.  A conclusive diagnosis will only be provided when further data analysis is completed.

The National Emergency Management Organisation (NEMO) of St. Vincent and the Grenadines continues to caution nearby residents to stay away from La Soufrière’s immediate vicinity, as sulphur-rich gases continue to be released into the atmosphere, during this time.  NEMO has also advised that there has been no explosive eruption at the La Soufrière Volcano.