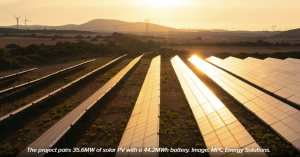 Construction has begun on a solar-plus-storage project on the Caribbean island of St. Kitts & Nevis, backed by Leclanché, Solrid and MPC Energy Solutions.

The launch of the SOLEC power plant is nearly 18 months later than expected with the start of construction first announced back in December 2020, covered by Energy-Storage.news. Covid had a role to play in delaying the project, which pairs a 35.6MW solar PV farm with 44.2MWh of lithium-ion battery storage, but extra funding which helped move it forward was secured in March 2021.

Leclanché has the engineering, procurement and construction (EPC) contract and will also provide its in-house Energy Management Software for the long-term running of the plant.

SOLEC will provide state-owned utility St Kitts Electric Company (SKELEC), which has signed a 20-year power purchase agreement (PPA) for the offtake, with roughly a third of the island’s energy needs.

Speaking at the groundbreaking ceremony on Friday 17 June, MPC CEO Martin Vogt said: “Today marks the start of a pioneering hybrid renewable energy project that combines solar power and battery storage not just for Saint Kitts and Nevis, but for the entire Caribbean region. This is the first of its kind and the first utility-scale power plant to combine these two technologies here in the region.”

“Once operational, this project will demonstrate the material advantages that hybrid projects can offer for the generation and storage of energy, grid integration and grid support as much as a competitive cost basis compared to conventional power.”

He described SOLEC as a “US$75 million project” and praised its mandated lender CIBC during the ceremony.