JPS is now welcoming new customers on the grid, in the Standpipe community of Liguanea, St. Andrew.  The Company has been working since earlier this year, to regularize over 140 households in addition to the 300 existing customers in the community.

Having installed a new system in the area, JPS originally set a target of August 7, for residents to become regularized and connected to the new system.  However, this period was extended to allow for more residents who had not yet signed up as customers. The Company has now transferred all new customers to the new network and is removing all of the old network today (September 11).

The Company is very pleased to see the high level of cooperation of most of the residents, who have come on board as new customers.  JPS looks forward to highlighting Standpipe as one of its model communities, that has been positively impacted by the Community Renewal programme, which helps to improve communities which are in need of safe and legal power supply.

In addition to the new system, JPS also supported residents, through its Back to School assistance initiative, which took place over a 3-day period in August. 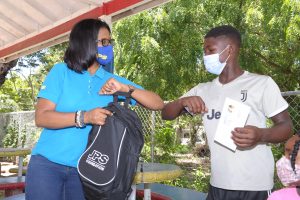 Marilyn knocks elbows, as she hands over school bag and book voucher

Community personnel have also consistently gone door to door, educating residents about energy management, and assisting new customers with LED bulbs, while those who were already customers on the network, were gifted with digital energy timers for their refrigerators. 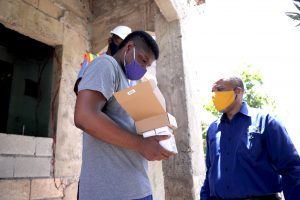 The Company also sought to make the regularization process more convenient by bringing a Temporary Office into the community to facilitate sign-ups and by engaging a Community Facilitator who is on hand to assist with queries.

The Company continues to reach out to other communities, in an effort to promote safe and legal energy usage.