JPS is announcing that it has signed an agreement with GB Energy Texaco for the first installation of Electric Vehicle chargers at select service stations. The first charging station will be at Texaco’s New Kingston location on Trafalgar Road, and will be open to the public by the end of next month.  The signing ceremony took place recently at GB Energy’s Head Office in New Kingston.

Speaking at the event, JPS Senior Vice President for Customer Services, Ramsay McDonald,  disclosed  that the Company was pleased to be forging this alliance with the energy giant, as the time is ripe for the continued build-out of charging stations in key locations across the island.hec

CEO of GB Energy Texaco, Mr. Bela Szabo, also pointed to the timeliness of the development, as some car manufacturers have already indicated that they will cease to produce cars which use internal combustion engines, starting as early as the mid-2020s.

JPS has been laying the groundwork for a sustainable environment for the electrification of transportation in Jamaica, and has set a target of one electric vehicle charging station to be accessible within a 30-mile radius, wherever any commuter is in the island.

The Company has already constructed five electric charging stations, three of which are operational. 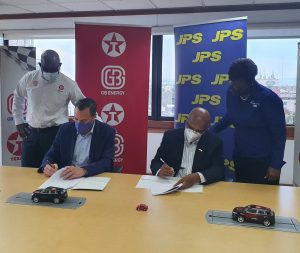 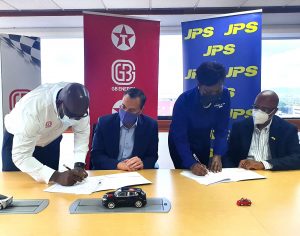