Seven-year-old Farah and her sister eat a meal at a temporary shelter in Marceline, Haiti. She and her family spent two hours under the rubble of their earthquake-destroyed home.
PHOTO:©UNICEF/Rouzie

The International Day for Disaster Risk Reduction is an opportunity to acknowledge the progress being made toward reducing disaster risk and losses in lives, livelihoods and health. The 2021 edition focuses on “International cooperation for developing countries to reduce their disaster risk and disaster losses.”  This is the sixth of the Sendai Seven targets.

The year 2021 promises to be a make or break year when it comes to delivering on the policy agenda agreed in 2015. Without real action on climate in the next ten years, extreme weather events will be overwhelming, especially for developing countries.

Disasters impact low- and middle-income countries disproportionately, particularly in terms of mortality, numbers of people injured, displaced and homeless, economic losses (as a percentage of GDP) and damage to critical infrastructure. We cannot eradicate poverty and hunger if we don’t step up investments in disaster risk reduction. International cooperation for developing countries through Official Development Aid (ODA) and capacity building is essential to boost disaster resilience in the face of extreme weather events and other natural and man-made hazards. 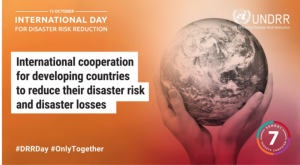 The International Day for Disaster Risk Reduction was started in 1989, after a call by the United Nations General Assembly for a day to promote a global culture of risk-awareness and disaster reduction. Held every 13 October, the day celebrates how people and communities around the world are reducing their exposure to disasters and raising awareness about the importance of reining in the risks that they face.

In 2015 at the Third UN World Conference on Disaster Risk Reduction in Sendai, Japan, the international community was reminded that disasters hit hardest at the local level with the potential to cause loss of life and great social and economic upheaval. Sudden onset disasters displace millions of people every year. Disasters, many of which are exacerbated by climate change, have a negative impact on investment in sustainable development and the desired outcomes.

It is also at the local level that capacities need to be strengthened urgently. The Sendai Framework for Disaster Risk Reduction is people-focussed and action-oriented in its approach to disaster risk reduction and applies to the risk of small-scale and large-scale disasters caused by man-made, or natural hazards, as well as related environmental, technological and biological hazards and risks.