How fast can we stop Earth from warming?

How fast can we stop Earth from warming?

The ocean retains heat for much longer than land does. Aliraza Khatri’s Photography via Getty Images

Picture how a radiator heats a home. Water is heated by a boiler, and the hot water circulates through pipes and radiators in the house. The radiators warm up and heat the air in the room. Even after the boiler is turned off, the already heated water is still circulating through the system, heating the house. The radiators are, in fact, cooling down, but their stored heat is still warming the air in the room.

This is known as committed warming. Earth similarly has ways of storing and releasing heat.

Emerging research is refining scientists’ understanding of how Earth’s committed warming will affect the climate. Where we once thought it would take 40 years or longer for global surface air temperature to peak once humans stopped heating up the planet, research now suggests temperature could peak in closer to 10 years.

But that doesn’t mean the planet returns to its preindustrial climate or that we avoid disruptive effects such as sea level rise.

I am a professor of climate science, and my research and teaching focus on the usability of climate knowledge by practitioners such as urban planners, public health professionals and policymakers. With a new report on mitigating climate change expected from the Intergovernmental Panel on Climate Change in early April, let’s take a look at the bigger picture.

How understanding of peak warming has changed

Historically, the first climate models represented only the atmosphere and were greatly simplified. Over the years, scientists added oceans, land, ice sheets, chemistry and biology.

Today’s models can more explicitly represent the behavior of greenhouse gases, especially carbon dioxide. That allows scientists to better separate heating due to carbon dioxide in the atmosphere from the role of heat stored in the ocean.

Thinking about our radiator analogy, increasing concentrations of greenhouse gases in Earth’s atmosphere keep the boiler on – holding energy near the surface and raising the temperature. Heat accumulates and is stored, mostly in the oceans, which take on the role of the radiators. The heat is distributed around the world through weather and oceanic currents.

The current understanding is that if all of the additional heating to the planet caused by humans was eliminated, a plausible outcome is that Earth would reach a global surface air temperature peak in closer to 10 years than 40. The previous estimate of 40 or more years has been widely used over the years, including by me.

It is important to note that this is only the peak, when the temperature starts to stabilize – not the onset of rapid cooling or a reversal of climate change.

I believe there is enough uncertainty to justify caution about exaggerating the significance of the new research’s results. The authors applied the concept of peak warming to global surface air temperature. Global surface air temperature is, metaphorically, the temperature in the “room,” and is not the best measure of climate change. The concept of instantly cutting off human-caused heating is also idealized and entirely unrealistic – doing that would involve much more than just ending fossil fuel use, including widespread changes to agriculture – and it only helps illustrate how parts of the climate might behave.

Even if the air temperature were to peak and stabilize, “committed ice melting,” “committed sea level rise” and numerous other land and biological trends would continue to evolve from the accumulated heat. Some of these could, in fact, cause a release of carbon dioxide and methane, especially from the Arctic and other high-latitude reservoirs that are currently frozen.

For these reasons and others, it is important to consider the how far into the future studies like this one look.

Oceans in the future

Oceans will continue to store heat and exchange it with the atmosphere. Even if emissions stopped, the excess heat that has been accumulating in the ocean since preindustrial times would influence the climate for another 100 years or more.

Because the ocean is dynamic, it has currents, and it will not simply diffuse its excess heat back into the atmosphere. There will be ups and downs as the temperature adjusts. 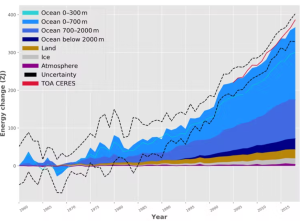 [Over 150,000 readers rely on The Conversation’s newsletters to understand the world. Sign up today.]

However, today, countries aren’t anywhere close to ending their fossil fuel use. Instead, all of the evidence points to humanity experiencing rapid global warming in the coming decades.

Our most robust finding is that the less carbon dioxide humans release, the better off humanity will be. Committed warming and human behavior point to a need to accelerate efforts both to reduce greenhouse gas emissions and to adapt to this warming planet now, rather than simply talking about how much needs to happen in the future.