Harris Delighted His Cabinet Is Moving Ahead With The Construction Of A Major Solar Farm In St. Kitts

Harris Delighted His Cabinet Is Moving Ahead With The Construction Of A Major Solar Farm In St. Kitts 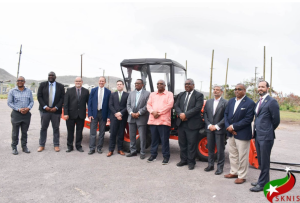 Prime Minister Dr. the Hon. Timothy Harris (5th from right) and other Government officials pictured with representatives of Leclanché.

BASSETERRE, St. Kitts, June 16, 2022 (Press Unit in the Office of the Prime Minister) – Prime Minister of St. Kitts and Nevis, Dr. the Honourable Timothy Harris, has expressed his delight in seeing the SOLEC Leclanché Solar Farm, a major capital project of the Government, officially getting underway. The Solar Farm will provide, upon completion, clean renewable energy for St. Kitts.

Prime Minister Harris was one of the specially invited guests who attended the official kick-off ceremony for the solar farm project at Needsmust Estate on Wednesday, June 15, 2022. Also in attendance were Deputy Prime Minister and Minister responsible for Energy, the Honourable Eugene Hamilton; Attorney General, the Honourable Vincent Byron; General Manager of the St. Kitts Electricity Company Ltd., Mr. Clement Jomo Williams, and the principals of Leclanché led by its Executive Vice President, Mr. Bryan Urban.

The solar generation and storage project will provide between 30-35% of St. Kitts’ baseload energy needs for the next 20 years while reducing carbon dioxide emissions by more than 740,000 metric tons.

Given what is happening on the global stage, where the ongoing conflict between Russia and Ukraine is leading to historically high gas prices, Prime Minister Harris said that this is indeed a welcomed project.

“We are pleased that we can look to the future in the context of the present reality that energy costs are escalating everywhere largely as a result of externalities – an important one being the war between Ukraine and Russia – and the disruption or the exacerbating of the supply chain issues relating to the movement of goods and services elsewhere,” Prime Minister Harris said.

The honourable Prime Minister added that the rollout of this significant project is another example of his administration delivering on its promise of providing a stronger and safer future for all its citizens and residents.

“Today we can speak about making progress in the arena of alternative energy, and you hear from the outline that it is not just about the solar plant—important as it is—in the forward thrust, in the strengthening of the country, as part of the delivery of the stronger safer future, reducing our vulnerability to fossil fuel and putting us onto an alternative that should be more reliable…[and] importantly for the most vulnerable of our country is that it should lead, in time, to a reduction in the cost of electricity to the consumer,” Dr. Harris said.

The solar farm is being built in the Basseterre Valley on a 102-acre plot of government-owned land adjacent to the current SKELEC power station. Upon completion, the St. Kitts project will be the largest solar generation and energy storage system in the Caribbean.