GIS(Geographic Information System) Day is celebrated on November 16th this year. This is an annual holiday celebrated on the third Wednesday of November, or the Wednesday within Geography Awareness Week. 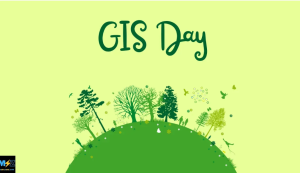 GIS is a system that has come to affect every aspect of our lives. From our GPS systems to Google Maps, GIS systems are integrated in everything and serve to make our lives easier every single day.

For example, GIS can predict areas of flooding. Whether you’re a geography newbie or master cartographer, you can celebrate the brilliant technology of GIS, its contributions to the real world, and your own GIS accomplishments on GIS Day every year.

In 1960 the world’s first true operational GIS was developed in Ottawa, Ontario, Canada, by the federal Department of Forestry and Rural Development. Developed by Dr. Roger Tomlinson, it was called the Canada Geographic Information System (CGIS) and was used to store, analyze, and manipulate data collected for the Canada Land Inventory, an effort to determine the land capability for rural Canada by mapping information about soils, agriculture, recreation, wildlife, waterfowl, forestry and land use at a scale of 1:50,000. A rating classification factor was also added to permit analysis.

By the late 1970s two public domain GIS systems (MOSS and GRASS GIS) were in development, and by the early 1980s, M&S Computing (later Intergraph) along with Bentley Systems Incorporated for the CAD platform. In 1986, Mapping Display and Analysis System (MIDAS), the first desktop GIS product was released for the DOS operating system. This was renamed in 1990 to MapInfo for Windows when it was ported to the Microsoft Windows platform. This began the process of moving GIS from the research department into the business environment.

By the end of the 20th century, the rapid growth in various systems had been consolidated and standardized on relatively few platforms and users were beginning to explore viewing GIS data over the Internet, requiring data format and transfer standards. More recently, a growing number of free, open-source GIS packages run on a range of operating systems and can be customized to perform specific tasks. The major trend of the 21st Century has been the integration of GIS capabilities with other Information technology and Internet infrastructure.

The first-ever GIS Day was held on November 19, 1999, during the Geography Awareness Week held during the same year. Geography Awareness Week has been held every November since 1987 and it is during this week that GIS day typically occurs. GIS Day was established in 1999 by Esri President and Co-Founder Jack Dangermond after he had been inspired by Ralph Nader to do so. Recognizing the importance and implication of this system, and that it was important that the people of the modern age be familiar with the effect it had on their lives, this holiday was established with the distinct purpose of raising awareness.

A geographic information system (GIS) is a type of database containing geographic data (that is, descriptions of phenomena for which location is relevant), combined with software tools for managing, analyzing, and visualizing those data. In a broader sense, one may consider such a system to also include human users and support staff, procedures and workflows, body of knowledge of relevant concepts and methods, and institutional organizations. It is roughly synonymous with geoinformatics and part of the broader geospatial field, which also includes GPS, remote sensing, etc.

Since its origin in the 1960s, GIS has been used in an ever-increasing range of applications, corroborating the widespread importance of location and aided by the continuing reduction in the barriers to adopting geospatial technology. The domains in which GIS is applied largely fall into those concerned with the human world (e.g., economics, politics, transportation, education, landscape architecture, archaeology, urban planning, real estate, public health, crime mapping, national defense), and those concerned with the natural world (e.g., geology, biology, oceanography, climate).

GIS has been implemented in a variety of different kinds of institutions: government (at all levels from municipal to international), business (of all types and sizes), non-profit organizations (even churches), as well as personal uses. The latter has become increasingly prominent with the rise of location-enabled smartphones. GIS implementations may be focused on a project or an enterprise. A Project GIS is focused on accomplishing a single task: data is gathered, analysis is performed, and results are produced separately from any other projects the person may perform, and the implementation is essentially transitory.

GIS technology is amazing and yet too few people know about or are interested in it. GIS Day presents a perfect opportunity to get more people interested in GIS and perhaps inspire the next generation of GIS users and developers. We love GIS Day because GIS technology takes traditional maps a step further and reveals previously unknown truths about the world. We can find obscure places and discover hidden truths by using GIS. Talk about a treasure hunt! So getting involved with GIS technology is actually pretty fun and exciting.

You can connect virtually on November 16, 2022, with a GIS Day celebration. Whether you are hosting your own event or participating solo, Esri’s digital GIS Day celebration will provide content to get you ready for an awesome event. Engage with others while discussing key topics such as climate change, sustainable prosperity, racial equity and social justice, lifelong learning, and GIS in time of crisis.

GIS Day is the perfect day to spread the gospel of GIS technology and its life-changing real-world applications to other people around the world. You can give a lecture or presentation about GIS, share your work with your family, host a GIS Day event, and write a blog, or even a song, about the GIS technology so that it can be promoted.

For the newbies, geocaching is a scavenger hunt-style game you can play using a GPS receiver. Go on an adventure tracking down hidden items at obscure spots. Bring out your inner Lara Croft and go treasure hunting on GIS Day. Or you can just submit a GIS Story Map to any of the StoryMap competitions around the world, such as the ArcGIS StoryMaps Competition for Sustainable Development Goals.

Most Searched FAQs on GIS Day:

1. When is GIS Day celebrated?

GIS Day is celebrated on November 16th this year.

2. Who is known as the father of GIS?

Dr. Roger Tomlinson, the pioneer geographer who developed GIS for the Canada Land Inventory, is popularly recognized and referred to as “the father of GIS” all around the world.