Following Fiona and Ian, What’s Next for Hurricanes in 2022?

Following Fiona and Ian, What’s Next for Hurricanes in 2022?

Last week, Hurricane Ian pushed through Cuba and made landfall as a Category 4 hurricane on Florida’s west coast, battering the city of Fort Meyers with high winds and a major storm surge, leaving at least 100 people dead. The storm then crossed back into the Atlantic, made a second landfall in South Carolina and caused heavy rains further along the coast.

Kris Karnauskas, associate professor in the Department of Atmospheric and Oceanic Sciences and a fellow in the Cooperative Institute for Research in Environmental Sciences (CIRES), studies global climate dynamics, including hurricanes. CU Boulder Today spoke with Karnauskas about hurricane seasons, Hurricane Ian and what the rest of the 2022 season might look like.

Kris Karnauskas, associate professor in the Department of Atmospheric and Oceanic Sciences and fellow in the Cooperative Institute for Research in Environmental Sciences (CIRES).

What is hurricane season?

What are the right conditions for a hurricane or tropical storm in the Atlantic?

A lot of thunderstorms will first form over Africa and move into the Atlantic Ocean, where they can turn into hurricanes. There are a couple conditions that occur during hurricane season that make it so conducive for the formation of storms. One is warm sea surface temperatures, as the temperature of the upper ocean is very important to tropical storms. The other is the way the wind in the atmosphere changes with height—called wind shear—this is very important. If the winds are relatively constant with altitude, that allows the storms to grow taller and stronger.

What defines a hurricane?

When a tropical storm reaches at least 39 miles per hour, the National Hurricane Center gives it the next name in alphabetical order. Once it reaches another, higher threshold of speed and intensity, that becomes a hurricane. A major hurricane is one where the speed is 110 miles per hour or faster. Hurricanes are also broken down into Category 1 up to Category 5. We consider any Category 3 storm or higher to be a major hurricane simply because storms at these levels have the fastest wind speeds and most potential to do damage if they make landfall.

What constitutes a normal hurricane season?

On average, we have about 15 named storms each year, and of those named storms, there are an average of eight hurricanes. Of those, we see about four major hurricanes. There’s also climate change, driven by human emissions of fossil fuels and carbon dioxide, which is causing warming of the sea surface temperature and the oceans, which we anticipate will change these numbers quite a bit. 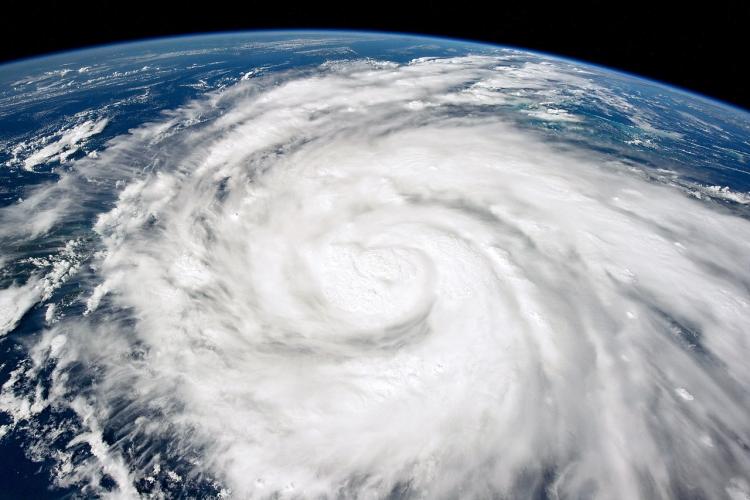 Hurricane Ian taken by the Expedition 67 crew onboard the International Space Station on Sept. 26, 2022, when it was south of Cuba. (Credit: NASA)

Would 2022 be considered a typical hurricane season?

So Hurricanes Fiona and Ian aren’t later than normal or out of season?

It feels that way, but it’s probably because this year’s hurricane season got off to a slow start. September is typically the busiest month of the hurricane season in the Atlantic. So this is fairly on-brand for a normal year. Hurricanes Irma and Maria in 2017 both occurred in September as well, and Hurricane Michael in 2018 was also a Category 5 and made landfall in Florida on Oct. 10.

How common is it for a hurricane to hit two coastlines, like with Hurricane Ian?

Land is bad for hurricanes—with the roughness of the land surface and the lack of warm water, they tend to die when they hit land and dissipate. But with Florida being a peninsula, it’s narrow enough that many storms have maintained just enough strength to rebuild once they get over the ocean again. In Ian’s case, which re-entered the Atlantic Ocean, it’s just pure bad luck driving that hurricane back towards the U.S. coast.

What do you wish more people knew about hurricanes?

It’s important to consider that the total number of hurricanes in a year isn’t the only factor that matters, especially to society. You could have a year where you have only a few storms, but if most of them cause a lot of damage, people are going to remember that year. In fact, as we unfortunately saw with Hurricane Ian, even a single storm can make landfall on two different coastlines.

The amazing thing about Fiona was how long it maintained its strength, bringing 100 mile-per-hour winds all the way up to Nova Scotia in Eastern Canada. That was record-breaking. Fiona left half a million people in Canada without power, or 80% of Nova Scotia, and even swept multiple people out to sea, sadly. The level of damage with Hurricane Ian is more extensive because its eyewall was so big. These little nuances with storms can add up to a really big difference.