Drivers of electric vehicles, heading to the North Coast for New Year’s celebrations, will be able to charge up their vehicles in Drax Hall St. Ann, where the first publicly accessible charging station will be constructed – just in time to ring in 2021.  The new station will be located at Boots Gas Station, followed quickly by more charging station options across the island.  This, as TOTAL Jamaica has also signed contracts with JPS, which will construct Electric Vehicle charging stations at four of TOTAL’s locations, kicking off with Ironshore, St. James by the end of January.  The other charging stations at TOTAL will be in Manor Park and Harbour View in St. Andrew, and Port Antonio, Portland.

Senior Vice President of Generation and Special Projects, Joseph Williams, noted that the inclusion of these stakeholders, is an excellent first step in creating the infrastructure necessary to support the widespread use of electric cars, buses and other vehicles.  “Our stakeholders are an important part of making this programme a reality.  These two retailers are a great start – giving us outlets in both the Corporate Area and rural Jamaica.  And there is more to come,” he hinted.  “We are in discussions with a number of major players in the gasoline retail industry, as well as locations that see high levels of vehicular traffic.”

Boots CEO, Wayne Boothe, said he was excited to be the first gasoline retailer to sign on to have an electric vehicle charging station at his operation.  Speaking at the recent contract signing in the garden parish of St. Ann, he enthusiastically responded, “Hey! When innovation knocks, the place to find it is at Boot. We will be charging electric cars in the near and foreseeable future. Everything in one Boot!”

Meanwhile TOTAL Managing Director, Christopher Okonmah, expressed his pleasure in the development, ‘We are happy to partner with The Jamaica Public Service Company on what we consider a pioneering and conscientious local initiative. This initiative aligns with TOTAL’s global strategy of becoming The Responsible Energy Major, specifically through accelerating the growth of electric vehicle charging business.”

JPS anticipates that by March 2021, the country will have ten (10) electric vehicle charging stations.  In addition to being more environmentally friendly, electric vehicles may also be cheaper to operate than the traditional gasoline or diesel powered automobiles. 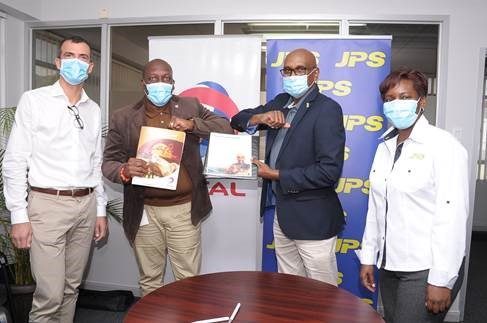