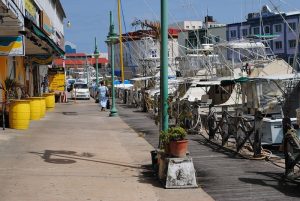 In line with Barbados’ ambitious targets of 100% renewable energy and carbon neutrality by 2030, IFC and IDB Invest are working with Hydrogène de France (HDF) and Rubis to support the development of Renewstable Barbados, a 50 MW solar generation facility with green hydrogen and lithium-ion battery storage that will provide firm and clean electricity to the Barbadian grid. In addition, Renewstable Barbados is designed to host the largest sheep farm on island, contributing to both energy and food security of Barbados.
Through a Collaboration Agreement, IFC will provide solar resource assessment, geotechnical and hydrological studies, and environmental life-cycle assessment, strengthening the bankability of the project for international investors to finance its construction in 2023. For its part, IDB Invest has financed part of the Environmental and Social Impact Assessment of the project which will comply with IFC’s internationally recognized standards.
Green hydrogen is produced by separating the water molecule in its two components, hydrogen and oxygen, through a process called electrolysis using renewable energy from the solar plant. Among the many applications that are being explored for green hydrogen, the storage of electricity is one particularly attractive to address the intermittency challenge of renewable sources of energy such as wind and solar. For further information see the IDTechEx report on The Hydrogen Economy, Fuel Cells and Hydrogen Production Methods.
Martin Spicer, IFC Director for Mexico, Colombia, Central America and The Caribbean, stressed that “climate change is one of the Caribbean’s most pressing challenges, which is why IFC is helping pave the way for viable and profitable renewable energy projects to help countries achieve their environmental goals.” In this sense, Spicer added, “green hydrogen is emerging as an unparallel technology for decarbonization of many aspects of the economy. This is a first of its kind project for IFC globally and we are delighted to promote, in partnership with HDF and Rubis, a reliable clean baseload solution using green hydrogen, a solution that can be replicated in other small island economies in the Caribbean and beyond.”
This project is the second of its kind developed by HDF in the region after one already under construction in French Guiana.
“We are living in a unique moment in our region where we must act together with the private sector in developing sustainable projects. Green hydrogen projects like this allow us to move in the right direction, especially in a region like the Caribbean,” says James P. Scriven, CEO of IDB Invest.
Although based on existing technologies, the production of green hydrogen and its subsequent use to convert it back to electricity using fuel cells have been prohibitively expensive. However, the continuous fall in cost of renewable energy – which comprises around 70 percent of the cost of producing green hydrogen – has resulted in a strong momentum and numerous initiatives to develop green hydrogen projects around the world. Green hydrogen as an electricity storage solution is already attractive in remote islands where the existing alternatives, such as heavy fuel oil diesel-based generation, are expensive, polluting and making the countries’ reliant on fuel imports.
The Renewstable Barbados project is under joint development by HDF Energy and Rubis as an innovative carbon-free baseload solution for Barbados, that is fully aligned with the island nation’s desire to reduce its dependency on fossil fuels. We are extremely pleased with the involvement of IFC and IDB Invest, supporting the development of this industrial-scale green hydrogen power plant. The regional and worldwide duplication of this solution is in progress, and we are looking forward to expanding this partnership beyond Barbados,” says Thibault Menage, VP Caribbean at HDF.
“As the majority Shareholder of Renewstable Barbados, Rubis is pleased to partner with HDF, and IFC and IDB Invest on this innovative project and is committed to working closely with the Government of Barbados to secure all necessary approvals and to diligently pursue all other activities and negotiate all necessary agreements to bring this project to completion. The partnership with IFC is an important step to move this project forward and to secure its financing,” says Mauricio Nicholls Chief Executive Officer for Rubis in The Caribbean.
Source: IFC
Top image: Pixabay