Personal Leadership: Strategies for Building Resilience in this Time of Covid 19

In a few short months, the world has been brought to its knees by the Covid-19 virus. Many have died with millions having tested positive for the virus. Businesses have closed and millions of workers across the globe have lost their jobs. No one can predict with certainty when this will end. However, everyone knows that a post Covid-19 work will be one in which many countries will be plunged into a financial crisis.

Governments have tried to put in place social programmes to bring relief but such programmes can only be short term. For many people the feeling of helplessness is overwhelming. It is expected that the levels of mental illnesses such as depression will increase and there will be a corresponding increase in suicides. Yet there are things that we can do at the individual level. Staying home and staying safe should now be obvious to everyone. But we do not have to just sit at home and wait…History has shown that human beings are amazingly resilient. It is for this reason that homo sapiens have survived and thrived longer than any living creatures that have ever populated this earth.

How then do we build our own resilience? From my own experience of being directly affected by two coups in Trinidad and playing an integral role in this rebuilding of three failed financial institutions, I will discuss strategies that participants can adopt to help them through this. This too shall pass. 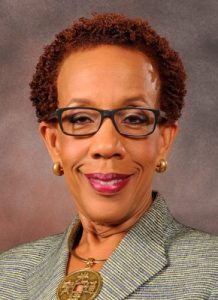 Sharon Christopher is the founder and CEO of Sharon Christopher and Associates, an organisation that has as its Mission “helping people live their best lives.” Ms. Christopher is a Leadership Development Coach, Motivational Speaker and an Attorney-at-Law  For many years she was the only woman in an Executive team which successfully led the merger, of three indigenous banks, during a severe economic downturn, turning the merged Institution ( First Citizens Bank) into a financial powerhouse with operations in five jurisdictions in the Caribbean and Latin America.

Ms. Christopher has a particular interest in developing people ( particularly women) for leadership roles. She believes that a person  cannot effectively lead others unless she first learns to lead herself.  Her clients include women and men in various sectors within the Caribbean and North America.  Ms Christopher is a Director on, and Treasurer of, the International Board of the International Women’s Forum., a global organisation of women leaders. She is the first person outside of North America to hold this position in the organisation’s 45 year history.  Ms Christopher is also the  Chair of the UWI, St. Augustine Campus Council. This Campus Council is the governing body of the St Augustine Campus of the UWI. She is the first woman to hold this position.  In addition she has held and continues to hold Directorships on numerous other Boards, of both local and regional companies and of charitable organizations. She also has significant Corporate Secretarial experience, having been a Corporate Secretary for almost three decades. She holds the Designation of Accredited Director.  She has delivered several presentations at local , regional and international conferences.

Ms. Christopher is the holder of a Bachelor of Laws Degree (Upper Second Class Honours) from the Cave Hill Campus of the University of the West Indies and a Legal Education Certificate from the Hugh Wooding Law School from which she graduated as the Most Outstanding Student. She also holds a Master of Laws Degree from the London School of Economics and Political Science.  She has been certified to be a facilitator/coach by Leadership Management International.

For more information about this and other upcoming events contact training@carilec.org or visit https://www.carilec.org/events