Europe wildfires: Are they linked to climate change?

Europe wildfires: Are they linked to climate change?

Heatwaves and wildfires across Europe are causing alarm – with warnings some countries could be in for their worst fire seasons so far.

So how do wildfires compare with previous years? 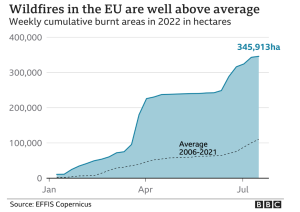 So far this year, the amount of land burnt by fires across the European Union is more than three times greater than what you would expect by the middle of July.

Almost 346,000 hectares (1,370 sq miles) of land have been recorded as burnt (as of 16 July), according to the European Forest Fire Information System (EFFIS).

Much of Western Europe has been hit by a record-breaking heatwave, which substantially increases the risk of fires. 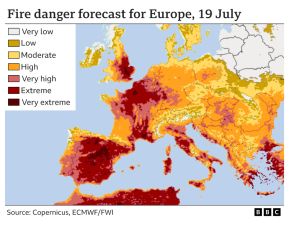 What is the overall trend?

This fire season is something of an outlier, according to experts.

“We’ve actually seen a decline in the area burned by fires in the Mediterranean and across Europe more widely over the last couple of decades, in a way that doesn’t marry up with the rapidly changing risk of fires,” says Dr Matthew Jones, a climate scientist at the University of East Anglia.

It is a complex picture, experts say, and hard to pick one reason for this trend for the whole of Europe. Over 95% of the fires in Europe are caused by human activity, according to the EFFIS.

And some places fires are becoming more expected, such as throughout the Mediterranean, are seeing better safeguards and awareness campaigns.

“People are more aware than ever of the risks of wildfire – and that’s leading to fewer wildfire ignitions and improvements in the way we fireproof the landscape,” Dr Jones says.

“Yet, when we get really extreme droughts and heatwaves like the current one, we get huge fire years that puncture through the long-term trend.”

Which countries have been worst hit this year?

France and Spain have had a big jump in the amount of land burnt by forest fires so far this season. 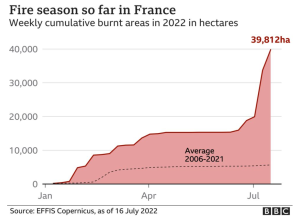 Both countries have recorded about seven times more land burnt through to the middle of July compared with average. 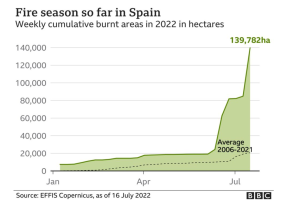 North-western Spain has seen some of the country’s worst fires this week.

The worst of France’s fires have been in the south-western Gironde region, where two engulfed more than 20,000 hectares in the past week.

Germany, the Netherlands, Belgium and Italy have also seen a big increase in land burned.

Unseasonably hot weather and low rainfall have dried out large areas of forest and grassland across much of Europe, creating good conditions for wildfires to spread.

As you can see in this map of the UK and France, much of the land has been dried out to a shade of brown compared with the green landscape of last year. 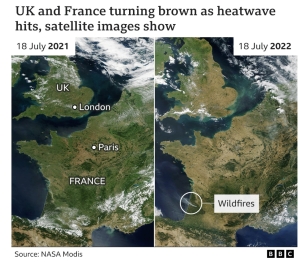 The UK has also seen an unusually large amount of land burnt by fires so far this year, over four times more than the seasonal average.

Are fires linked to climate change?

“Heatwaves and droughts are exacerbated by climate change and are absolutely the defining factor in years with massive wildfire outbreaks, like the present one,” Dr Jones says.

But he says other factors such as forest management can affect the likelihood of fires in years with more typical weather.

In high-risk areas of Europe, authorities are increasingly burning down some vegetation, under carefully managed conditions, to make it harder for wildfires to spread. 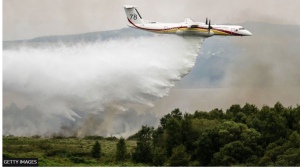 There also needs to be better water management to tackle drought conditions, according to some experts.

“In many parts of Europe, you have lots of small rivers, swamps and flood plains which have been drained out, which increase the dryness of the forest,” Dr Otto says.

“But we definitely see trends in fire weather risk because of climate change.

“The risk is higher in the Mediterranean region than the rest of Europe.”

Studies show increasing fire risk for central and southern regions of Europe over the past couple of decades.