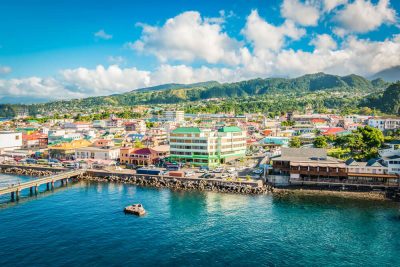 Roseau, June 08, 2022 (GLOBE NEWSWIRE) — The Commonwealth of Dominica, a small island nation in the Caribbean, is not leaving its fate up to chance as they face the 2022 Atlantic Hurricane Season, which is predicted to be particularly stormy this year.

While Dominica cannot prevent hurricanes, they are doing all it can to ensure the safety of its citizens. The government has constructed emergency shelters, trained members in vulnerable communities, and educated citizens on ways they can safeguard themselves.

Early preparation and understanding of the risk is key to being hurricane resilient and climate-ready.

The Atlantic hurricane season typically runs from 1 June to 30 November, during these months, tropical storms are most likely to form and wreak havoc in the Caribbean.

“NOAA predicts a 65% chance of an above-normal season, a likely range of 14 to 21 named storms of which 6 to 10 could become hurricanes, including 3 to 6 major hurricanes (category 3, 4 or 5),” the NOAA stated in a recent press release.

Several climate factors can be attributed to the predicted hurricane season. These factors include La Nina, warmer-than-average sea surface temperatures in the Caribbean Sea and the Atlantic Ocean, and weaker tropical Atlantic trade winds.

Climate change has led to the warming of oceans, which leads to more water pumped into the sky, making hurricanes more powerful, and rising sea levels mean that storm surges are becoming more dangerous.

Dominica is on the frontline of climate change and is a target of natural disasters, mainly hurricanes and tropical storms. The nation does not produce greenhouse gases yet is among the main victims in the battle against climate change.

In 2017, Hurricane Maria damaged nearly every building, destroying nearly a quarter of them. Maria felled rainforests and knocked out the electricity, communications, and water supplies.

Since then, the nation has been committed to building back better, with the aim to become the world’s first climate-resilient country.

“Despite our disadvantages in Dominica, we are not leaving our fate up to chance, since 2017 we have taken decisive actions to realize our vision to build resilience within key sectors with support from local stakeholders as well regional, international agencies and organizations such as European Union,” said Dr the Hon Roosevelt Skerrit, Prime Minister.

The Prime Minister recently advised citizens to remain cautious and shared tips on how one can safeguard themselves and their communities in times of a natural disaster.

In May 2022, the government of Dominica commissioned two regional emergency shelters to which 300 – 500 people in Castle Bruce and Jimmit will benefit. These self-contained facilities can house those affected by a severe storm for about two weeks.

The shelters were built at a cost of EC$33 million with funding from the European Union, and feature wide spaces to serve as dormitories, storage rooms, kitchens, washrooms, medical centres, laundry facilities, administrative offices and alternate water and power supplies.

The two shelters are part of our resilience journey to combat climate change and lay a sustainable development path to a Dynamic Dominica.

“Hurricane Maria taught us unless we do this thing properly and we do it right we will be devastated each time because we really cannot prevent ourselves from being hit by a hurricane. But we are hoping that with our resilient building in terms of our infrastructure our roads, our bridges, our schools, and the health centres we can add some resilience and we can protect ourselves, our societies, and our communities from any such onslaught that may come in the future,” said Hon. Reginald Austrie, Member of Parliament for the Cottage Constituency.

Following Hurricane Maria, the government created the Climate Resilience Execution Agency for Dominica (CREAD). Its purpose is to lead and coordinate strategic initiatives across all sectors in the country with the goal of leading the climate resilience mission.

“In the Dynamic Dominica that we are creating, all must have access to safe shelter; we are keeping true to our promise of 5,000 resilient homes for the people of Dominica. We do not ever want our citizens to revisit the despair resulting from displacement and homelessness due to Hurricane Maria,” the Prime Minister said.

When Hurricane Maria hit Dominica in 2017, it caused damage worth an estimated 220 per cent of its GDP. The majority of the small island’s roads, hospitals and housing sectors were also damaged. However, thanks to international, regional, and internal funds like that of the country’s long-running Citizenship by Investment Programme, Dominica has managed to recover at great lengths.

The Government of Dominica continues to build resilient climate infrastructure and develop strategies to strengthen the systems to boost capacity at the individual and community levels to more effectively respond to disaster impacts.

For several decades, Dominica has used funds generated by its Citizenship by Investment (CB) Programme to realise its ambitions towards constructing climate-resilient infrastructure that can withstand natural disasters, while creating lasting jobs in construction and tourism.

These projects include building 5000 climate-resilient homes, world-class hospitals, healthcare centres, and community centres. The nation has also invested and begun work on a Geothermal Power Plant in an effort to reduce its dependence on fossil fuels.

“The Government of Dominica is utilising its Climate Resilient and Recovery Plan (CRRP) to overcome the damages and build new sustainable infrastructure to ensure durability against extreme natural disasters. Despite being small in size, Dominica is working hard to achieve the desired goal of becoming the world’s first climate-resilient country,” said Micha Rose Emmett, CEO of the world’s leading government advisory and marketing firm, CS Global Partners

“The beauty about Dominica’s Citizenship by Investment Programme is that it really is a win-win solution for both the investor and the country as it enables the nation to grow sustainably without international aid and funds are used to build roads, schools, hospitals, and more,” Emmett added.

Established in 1993, Dominica’s Citizenship by Investment Programme is one of the world’s longest-running, fastest and most secure programme of its kind. Dominica’s Programme has helped vetted individuals and their families in becoming citizens of the nation once they either invest in a government fund or purchase pre-approved real estate properties.