Grand Cayman, Cayman Islands, November 10, 2021. CCRIF SPC is pleased to announce that the Government of Ireland – through Irish Aid – has provided €1 million (US$1.16 million) to support the rollout of COAST – CCRIF’s parametric insurance product for the fisheries sector – in five additional CCRIF member countries in the Caribbean. The Caribbean Ocean and Aquaculture Sustainability Facility (COAST) initiative was launched by CCRIF SPC with support from the World Bank and the US State Department in 2019. The Caribbean is the first region globally to develop and implement parametric climate risk insurance for the fisheries sector. For the first time ever, vulnerable fishing communities now have access to insurance developed specifically for their needs, protecting their livelihoods and playing a key role in closing the protection gap. 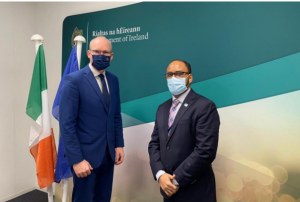 Grenada and Saint Lucia have held COAST policies since the launch of the product in 2019, receiving premium support from the World Bank each year for policy renewal.

With this support from Irish Aid, a total of seven countries in the Caribbean will now have access to COAST. The fisheries sector in the Caribbean is an important source of livelihoods and contributes significantly to food security, poverty alleviation, employment, foreign exchange earnings, development and stability of rural and coastal communities, culture, recreation and tourism.

Like CCRIF’s other insurance products, COAST insurance also is parametric, whereby payouts are made based on a pre-defined level of wave height, rainfall, wind or storm surge and their impact. Therefore, payouts can be made quickly – within 14 days of the event. As with other CCRIF products, governments are the policyholders of COAST. However, when a COAST policy is triggered, the payout is disbursed by the government to fisherfolk, including fishers, boat boys, fish vendors and processors to enable them to recover faster after a weather-related event. COAST encourages the participation of women and recognizes the many roles that women play in the fisheries sector in the Caribbean. The COAST product provides coverage for losses caused by “bad weather” (heavy rain and high waves) on fisherfolk and for direct damages caused by tropical cyclones (wind and storm surge) to fishing vessels, equipment and infrastructure.

CCRIF CEO Isaac Anthony at the signing of the grant agreement stressed that, “COAST is the first parametric insurance ever developed for the fisheries sector and has been developed to advance resilience and sustainable management of the marine environment, leading to a stronger blue economy in the region. The COAST policy is an example of inclusive insurance – it is more than a financial instrument as it is designed to protect the livelihoods of the most vulnerable, thereby contributing to sustainable livelihoods, national food security and community development, especially in rural areas.”

The funding from Irish Aid will be used to support not only activities necessary to implement the COAST policy but also activities that will contribute to the sustainable management of the fisheries sector in the five countries. Activities will include, for example: data collection and model enhancement for the specific fisheries risk profiles for each country; enhancement of national systems for fisher and vessel registries, fisheries regulations and payout mechanisms; sensitizing fishers and others in the industry to COAST and the benefits of insurance and the linkages with sustainable management of associated ecosystems and food security; and the development of fisheries management plans.

Ireland’s Minister for Foreign Affairs, Hon. Simon Coveney, TD, in commenting on the grant to CCRIF said, “This Irish Aid support to CCRIF’s Climate Risk Insurance is part of the Government of Ireland’s commitment to Small Island Developing States. It helps maintain a sustainable blue economy in the Caribbean, through enabling quicker local responses to the effects of climate change and environmental degradation.”

CCRIF CEO, thanked the Government of Ireland for its contributions to CCRIF over the years. “Your contribution in January 2019, of another grant of €1 million to support the development of the electric utilities parametric insurance product, led to the launch of the CCRIF electric utilities product – a unique product providing coverage to electric utility companies for transmission and distribution lines that are oftentimes impacted by storms and hurricanes and for which indemnity insurance cover is usually not available or too expensive”. The Anguilla Electricity Company purchased the first policy in 2020 and CCRIF continues to work with the Caribbean Electric Utility Services Corporation (CARILEC) and electric utilities in the region to roll out the product in other countries. The Government of Ireland was one of the original donors to the Multi-Donor Trust Fund that was established for the initial capitalization of CCRIF in 2007.

The increasing frequency and severity of climate-related hazard events have forced governments to consider new ways of addressing the financial consequences of natural disasters, and there is a growing interest among CCRIF members in enhancing their disaster risk insurance and requesting coverage for additional economic sectors and perils so that they are financially prepared when disasters occur. Governments are interested in coverage for additional economic sectors such as agriculture, and for additional perils such as drought and run-off associated with heavy rainfall and linked to soil saturation as well as loss of ecosystem services as a result of watershed or coral reef degradation. This expressed demand has resulted in tremendous growth in CCRIF and in the number of products the Facility has made available. The growth of CCRIF also has resulted in governments increasing their understanding of financial protection and the importance of disaster risk financing as a means of reducing budget volatility in the face of natural disasters.

About CCRIF SPC:
CCRIF SPC (formerly the Caribbean Catastrophe Risk Insurance Facility) is the world’s first multi-country, multi-peril risk pool based on parametric insurance. CCRIF provides parametric catastrophe insurance for Caribbean and Central American governments, and for electric utility companies. CCRIF offers parametric insurance for tropical cyclones, excess rainfall, and earthquakes and for the fisheries and electric utilities sectors – insurance products not readily available in traditional insurance markets. The Facility operates as a developmental insurance company – as the goods and services it provides are designed to enhance the overall developmental prospects of its members. CCRIF has 23 members – 19 Caribbean governments, 3 Central American governments and 1 Caribbean electric utility company. Since its inception in 2007, CCRIF has made 54 payouts totalling US$245 million to 16 of its members. All payouts are paid within 14 days of the event.

CCRIF was developed under the technical leadership of the World Bank and with a grant from the Government of Japan. It was capitalized through contributions to a Multi-Donor Trust Fund (MDTF) by the Government of Canada, the European Union, the World Bank, the governments of the UK and France, the Caribbean Development Bank and the governments of Ireland and Bermuda, as well as through membership fees paid by participating governments. In 2014, a second MDTF was established by the World Bank to support the development of CCRIF SPC’s new products for current and potential members and facilitate the entry of Central American countries and additional Caribbean countries. The MDTF currently channels funds from various donors, including: Canada, through Global Affairs Canada; the United States, through the Department of the Treasury; the European Union, through the European Commission, and Germany, through the Federal Ministry for Economic Cooperation and Development and KfW. Additional financing has been provided by the Caribbean Development Bank, with resources provided by Mexico; the Government of Ireland; and the European Union through its Regional Resilience Building Facility managed by the Global Facility for Disaster Reduction and Recovery (GFDRR) and The World Bank.