Castries, St. Lucia, October 11, 2021: The 33rd Annual General Meeting (AGM) of the Caribbean Electric Utility Services Corporation (CARILEC) was held virtually on the Zoom Platform on September 28th, 2021.  The newly elected CARILEC Board of Directors represents pioneering leadership, invaluable experience, innovative perspectives, and critical institutional knowledge, which are all integral to the implementation of the Corporation’s strategic vision for the period 2021 to 2024.

Each of these newly elected Directors will contribute tremendously towards the effective leadership of the Caribbean’s Association of Electric Energy Solution Providers, as they possess a wealth of experience and expertise in their respective core disciplines, including law, finance, and human resource management.  Prior to her appointment as President and Chief Executive Officer (CEO) of FortisTCI, Mrs. Ruth Forbes served as Senior Vice President of Corporate Services, Chief Financial Officer (CFO), and Company Secretary, within the utility.  Her resume includes over fourteen (14) years of experience in the energy sector.  Mrs. Solange Bertilia McKenzie first joined DOMLEC in 1997 as part of the human resources team and was appointed General Manager of the utility in 2014, becoming the first woman and non-engineer to lead Dominica’s sole electric utility.  Mr. Wayne Caines has acquired a wide array of expertise and experience in several fields, having served as Crown Counsel in the Bermuda Department of Public Prosecution, a Senator in the Bermuda Government, and Chief Executive Officer (CEO) of Digicel Bermuda.  He was appointed as President of BELCO in December 2020.

Mr. Hugo Hodge Jr., Vice President and General Manager of Tantalus Systems Incorporated (Caribbean Basin), and Mr. Gianni Moreno, International Sales Marketing Director of Hitachi ABB Power Grids have both been re-elected for a one-year term, from 2021 to 2022, as Director and Alternate Director, respectively, for the Associate and Affiliate Membership categories.

Mr. Roger Blackman, Managing Director of the Barbados Light and Power Company Limited (BLPC), was re-elected to serve as the Vice Chairman of the Board.  Also re-elected in the capacity of Board Director, was Mr. Jervan Swanston, Systems Planning and Project Manager with the Nevis Electricity Company Limited (NEVLEC). 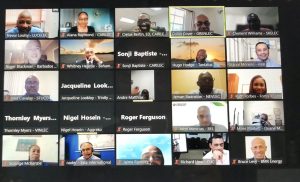 The Caribbean Electric Utility Services Corporation (CARILEC) is an association of energy solution providers and other stakeholders operating in the electricity industry in the Caribbean. CARILEC was established in 1989 with nine (9) members as part of an electric Utilities modernization project funded by USAID and implemented by NRECA under a five-year “Co-operative Agreement.” Currently, CARILEC comprises over one hundred members. This includes thirty-three (33) Full Members that are electric Utilities, and over eighty (80) Independent Power Producers (IPPs), Associate and Affiliate Members that are companies involved in some aspect of servicing the electric Utility business.