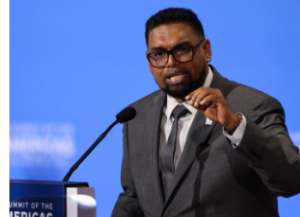 Guyana is taking the world by storm since discovering offshore oil and gas reserves in 2015.

Amid multiple global crises, Guyanese president Irfaan Ali’s first visit to Washington last month unveiled the unique opportunity for the United States to advance its strategic and commercial interests in Guyana and the wider Caribbean.

Guyana is taking the world by storm since discovering offshore oil and gas reserves in 2015. The English-speaking Caribbean country located at the tip of South America has since seen new discoveries occur at a breakneck pace, putting estimated reserves north of 11 billion barrels. The country is on track for 1 million barrels per day by 2027, which will put Guyana among the top producers in the region and a world leader in reserves per capita.

But while Guyana is quickly emerging as a regional hydrocarbon power, its leaders are already envisioning a future beyond oil and gas. This is reflected in an ambitious plan to transform Guyana’s energy matrix over the next decade, using oil, natural gas, and a mixture of renewables. Guyana is aware of the pitfalls of being solely dependent on fossil fuels and is cognizant that there is a limited shelf life for hydrocarbons as countries transition to renewables over the next two decades.

As a result, Guyana could emerge as a model for navigating the dual energy nexus—the need to guarantee energy security now while laying the groundwork for the energy transition. The country occupies a unique and privileged position, mostly devoid of counterproductive zero-sum debates over hydrocarbon production. The country’s leaders are pro-development, understanding that oil and gas provide both short-term energy security and the capital Guyana needs to invest in renewable energy. The challenge is that despite surging oil revenue, external financial, technical, and political support is needed to reach its ambitious goals. This is where the United States, a strong Guyanese ally, can play a key role.

Russia’s invasion of Ukraine is abruptly changing global thinking about the future of energy supplies. In the West, ambitious and idealistic climate goals have run up against the hard geopolitical reality of a hostile power weaponizing its energy resources. Global leaders are quickly coming to terms with the need to prioritize energy security as the basis for a politically and economically sustainable energy transition. In this context, Guyana’s large and growing oil and gas reserves take on both national and global relevance.

Despite its offshore oil and gas reserves, Guyana still relies almost entirely on imported fuel to generate power for households and firms. Against this backdrop, Guyana has launched an ambitious gas-to-shore plan to sharply reduce electricity costs while transitioning steadily towards a cleaner energy matrix. The flagship project envisions a 220km underwater pipeline and the construction of a 300MW power plant to generate electricity from natural gas in the offshore Stabroek block. The project can reduce electricity prices by almost 50 percent and cut carbon emissions in half.

Further, as part of Guyana’s Low Carbon Development Strategy 2030 (LCDS), the country envisions hydro supplying most of its power over the subsequent decade, allowing the energy matrix to exceed 30 percent renewable sources by 2027 (up from 1 percent currently). There are plans to incorporate non-conventional renewables by using oil wealth to secure financing for clean energy investments, including a utility scale wind facility that is moving forward this year. These investments will allow wind and energy capacity to gradually increase by 2030 and rapidly accelerate by 2035, with these sources projected to contribute over 60 percent of peak demand.

Guyana’s pragmatic vision for leveraging oil resources to advance both energy security and transition and using natural gas as a bridge fuel can be a model for other developing countries. But U.S. and multilateral support will be needed to meet these goals.

Guyana’s emergence as a hydrocarbon power has global implications as well. A Rystad energy study notes that global demand for crude is likely to remain at 50 million barrels per day even amid the world’s energy transition. With a break-even price of $28 per barrel and a carbon footprint 50 percent below the global average, Guyana is among the oil producers best positioned to meet continued demand over the next several decades. There is also the added advantage of low geopolitical risk—a key driver of volatility in global energy markets. And as companies pull back from high-risk and high-emissions projects, Guyana will likely emerge as one of the last frontiers of the global oil industry, especially after carbon taxes and environmental, social, and governance standards price most suppliers out of the market.

Guyana’s contribution to global climate goals will go well beyond providing low-cost and low-emissions crude. Sitting on the northern fringe of the Amazon rainforest, Guyana has a forest cover of more than 85 percent with its forests 99 percent intact, making the country a major carbon sink that is storing approximately 19.5 billion tons of CO2. This makes Guyana a prime market for carbon credits, a crucial mechanism for achieving net zero emissions at the global level.

To capitalize on its hydrocarbon reserves and become a model for the dual energy nexus, Guyana needs to be stable. The 2020 national elections stoked fears that the country might fall victim to political unrest, but the panic proved unfounded. Guyana was paralyzed by an electoral crisis that saw the then-incumbent coalition government hurl accusations of electoral fraud at the then-opposition—the PPP/C—who were declared the winner of national elections. The five-month standstill put Guyana’s democratic system in the spotlight, but ultimately its institutions passed their first stress test since the country became an oil and gas producer.

But political challenges do remain, such as reforming key electoral institutions, bridging the distance between the incumbent and the opposition, and addressing simmering ethnic tensions that tend to escalate during key political junctures. For the moment, these challenges are on the minds of the current government. President Irfaan Ali has looked to reform the country’s constitution and is committed to the One Guyana initiative—a framework that hopes to harmonize all Guyanese in political, legislative, and social circles regardless of ethnic affiliation. And while Guyana’s social challenges are important to address, they are a far cry from the rebel movements, terrorist organizations, and authoritarian regimes that afflict many leading oil producers.

Economically, Guyana is poised to grow by 47 percent in 2022. And while this growth is driven by oil and gas, Guyana has undertaken several initiatives to strengthen its economy by investing in non-oil sectors. The country has prioritized investments into agriculture, the construction of almost 50,000 new housing units, building roads to open up the mining space, eco-tourism, and banking on the vast potential of benefiting from carbon credits.

An Opportunity for the United States

U.S. support for Guyana’s energy ambitions can advance broader geopolitical goals. China has built up a strong commercial presence in Guyana through major infrastructure projects and a 20 percent stake in the offshore Stabroek block, but it is currently on its back foot in the country. Chinese projects, including a remodeling of Cheddi Jagan International Airport, a school laptop program, and, most recently, the flagship Amaila Falls hydro dam have faced commercial challenges and increased scrutiny. This provides an opening for deeper U.S. engagement, spanning public and private actors. Further, supporting Guyana’s potential as an anchor of regional energy security in the Caribbean can help keep Venezuela’s influence at bay. The spike in global oil prices is pushing some Caribbean countries to once again look at alternative sources, starting with the once dormant Petrocaribe, a Chavez-era scheme to provide discounted fuel in return for political allegiance.

Regional initiatives should start with the Biden administration revamping the recently announced PACC2030—which looks to strengthen energy security via greater access to renewables and financing—following Guyana’s approach to the dual energy nexus. Doing so can help Guyana shore up energy security in the Caribbean, especially other hydrocarbon producers. Trinidad and Tobago is exporting LNG globally and Suriname is set to auction 60 percent of its offshore blocks over the next year. The accumulated capital can be used to finance regional renewable energy projects or offset the cost of fuel imports. The U.S. benefit would be showing others that it is an invaluable partner for sustainable development, whose approach is attuned to the reality of countries’ development needs.

Additionally, the United States can support Caribbean-Latin American cooperation in the energy space. Currently, there is interest among Guyana, Suriname, French Guiana, and Brazil to build an energy corridor, also known as the Arco Norte Electrical Interconnection. This corridor, if successful, will lower electricity costs, strengthen energy supply, reduce carbon emissions, and increase export earnings. This would be a ripe opportunity for U.S. investors and for the United States to export its knowledge and technical expertise to support the corridor.

In this way, Guyana’s development roadmap can help navigate the dual energy nexus at the national, regional, and global levels. The United States has a window of opportunity to actively embrace the country’s vision. Doing so would advance U.S. strategic goals from security to climate policy, open up investment opportunities for American companies, and contribute to the stability and sustainable development of key U.S. partners and neighbors.