A spokesperson said, “Bermuda Electric Light Company Limited [BELCO] today announced that, after 32 years, BELCO President Dennis Pimentel is leaving the company and several new management appointments have been made.

“Mr. Pimentel will depart from the Company in June 2021 to pursue other opportunities. As part of a restructuring initiative, Ascendant President Wayne Caines will assume the additional role of President of BELCO. 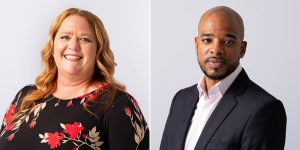 “The posts were advertised internally within the Company with several qualified applicants.

“Shelly attended Bermuda High School and has been with BELCO for over 20 years, having started with the company as an Environmental Field Technician in the Environment department. Shelly has held roles in the Customer Accounts and Customer Experience Departments and was most recently the Director of Retail Operations, responsible for the Customer Experience, Metering & Revenue Protection and AMI operations of the Company.

“Nadir is a graduate of the Berkeley Institute and began his career in Washington DC, USA working in the Federal Government Contractor General Service Administration Central Plant Heating, Operation and Transmission Division for four years.

“Nadir then moved back home to Bermuda and joined BELCO nine years ago, as an Engineer-In-Training. Nadir went on to become an Engineer within the Grid Operations team and most recently held the position of Director of Grid Management Services, responsible for Engineering, Construction, Maintenance and Records.

“Nadir and Shelly will assume their roles on April 1st and will work with Mr. Pimentel to ensure a smooth transition.

BELCO President Wayne Caines said: “I’m pleased to announce these new appointments of highly qualified and dedicated Bermudian members of our team. Shelly and Nadir bring many years of experience and are an asset to our Company.”

“Our team is dedicated to our core values of operational excellence and sustainability and I look forward to the leadership of Nadir and Shelly in progressing these values. We are implementing efficiencies across our Company to improve our operations and continue to move forward on developing a sustainable energy future as we work towards the Integrated Resource Plan of having 85% renewable energy generation by 2035.”