As rich nations haggle over climate solutions, storm-ravaged Caribbean is taking matters into its own hands

As rich nations haggle over climate solutions, storm-ravaged Caribbean is taking matters into its own hands 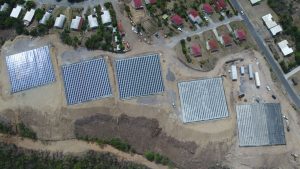 CNN — When Hurricane Fiona slammed into Puerto Rico in September, it triggered a nearly island-wide blackout as the storm’s strong winds took down the fragile power grid.

Carlos Ramos spoke to CNN as he helped his friends clean up their flood-damaged beach home in Salinas. Ramos said most of his neighbors in Aguas Buenas, in the island’s central mountain range, were among those who lost power in the wake of the hurricane.

Frustrated by the rising cost of electricity and the ever-looming threat of power outages on the storm-stricken island, the 59-year-old retired bank worker had solar panels installed on his home.

“All my neighbors said I was crazy for getting the solar panels,” he told CNN. “Now they’re sitting in the dark. It was the best investment.”

World leaders are in Sharm el-Sheikh, Egypt, this week for the UN’s COP27 climate summit where they are negotiating solutions to the climate crisis and haggling over how to help developing nations switch to clean energy and pay for extreme weather disasters.

But as they do so, millions of people are already dealing with the impacts.

Among the regions that have long endured these devastating impacts are the Caribbean islands, where sea level is rising and hurricanes are becoming more intense.

But Caribbean leaders, residents and even utility companies say they are tired of waiting for world leaders to save them. Experts and residents tell CNN that the islands are now eagerly adapting on their own through grant funding, phasing out fossil fuels and advancing clean energy across the region, to make them better prepared for the worsening impacts of the climate crisis.

“We don’t have the luxury of being able to sit by and wait until the planet comes to an agreement,” Racquel Moses, CEO of the Caribbean Climate-Smart Accelerator, told CNN. “We have been waiting, and we have been trying to do the best that we can with the resources that we have. But we are not seeing enough momentum and we keep sustaining losses.”

Microgrids keep the lights on

Last year, the Bahamas successfully developed a solar-powered microgrid that provides renewable energy to every home on Ragged Island – a small island community which was devastated by Hurricane Irma. The Category 5 tore through the Caribbean in 2017, displaced thousands of people and leveled electric grids.

The Ragged Island electric project was designed so that the next time a storm hits and takes down the power system, the 390-kilowatt microgrid can disconnect from the main grid and keep the lights on for residents.

That project’s success created a ripple effect across the Bahamas, said David Gumbs, director of the Islands Energy Program at the Rocky Mountain Institute, a non-profit group that’s working to scale up clean energy programs to curtail global emissions. The country has now deployed even more microgrids to other islands, totaling nearly 6.5 megawatts of renewable power across the country — which is enough to power around 300 Caribbean houses.

“The project is definitely a success,” Gumbs told CNN. “We’re in the phase of transition. There are now a number of islands that are champions in big initiatives.” 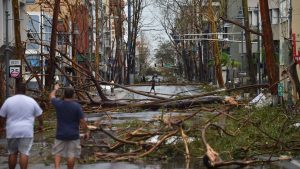 Damaged trees after the passage of Hurricane Maria, in San Juan, Puerto Rico, in September 2017.

Moses said 2017’s back-to-back hurricanes — first Irma, then Maria — was the turning point for the Caribbean, where residents and government leaders said they could no longer afford to wait and “be sitting ducks, hoping” that wealthy countries would rescue them from the climate crisis, or halt its acceleration.

“We are already under threat,” Moses said. “You’ve just seen Hurricane Fiona and what it’s done, not only to islands in the Caribbean, but also in the US – the most powerful economy on the planet – and yet responding to billions of dollars’ worth of damages is going to be problematic.”

The Caribbean islands contribute a tiny fraction to the climate crisis — less than 2% of planet-warming emissions, Moses said — yet they are on the frontlines when it comes to climate disasters.

“When you’re paying four times as much for electricity, and your income is four times less than the average income in the US, it just creates such a hardship for people,” he said. “And those are the people we are worried about getting left behind.”

Gumbs experienced the wrath of Irma himself in his home island of Anguilla, where at the time he was the CEO of the island’s utility company. Now with RMI, he has been overseeing this energy transition across the Caribbean region, redesigning the electricity grid to be free of fossil fuels and climate-resilient.

“There’s such an enormous opportunity,” Gumbs said. “We would love for it to happen at scale, to just transform the entire system to renewables tomorrow, but there are certain barriers to do that.”

At COP27, money is the biggest debate. Developing nations are putting more pressure on the world’s richest countries to help them recover from climate disasters. Negotiators will also discuss the existing promise of climate finance meant to help developing countries adapt to climate change and transition to clean energy – a $100 billion-a-year pledge that rich countries have yet to make good on. 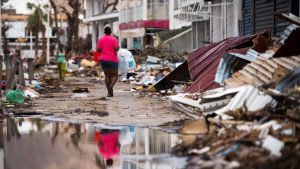 A woman walks on a street in Saint-Martin on September 11, 2017, after Hurricane Irma.

But even then, Gumbs said it’s hard for low-income countries “tap into” those funds: “It just takes years to get the money out,” he said. “It’s always a problem, but there are a number of ways to overcome that.”

On Tuesday, RMI and investment fund Lion’s Head Global Partners launched a new Caribbean Climate-Smart Fund to accelerate that clean energy shift. The initiative intends to expand the islands’ access to resilient clean energy, which advocates say would help Caribbean nations not only adapt to a warmer future, but also save millions each year in utility costs.

Gumbs said the fund will comprise more than $150 million of philanthropic money and will be spread across more than 20 Caribbean islands.

Charlin Bodley, the global south manager for RMI, said wealthy countries must look beyond reducing their climate emissions – which she said is the “easy part” – and consider how they will support small island nations suffering the consequences of their fossil fuel use.

“There is a level of support that is necessary,” Bodley, who is based in St. Lucia, told CNN. “It’s really, at this point, a matter of survival for Caribbean.”

And because the Caribbean islands see clean energy as a solution to withstand disasters but also to save on electricity costs, Moses said the momentum and political interest across the region is growing, and island governments are turning to groups like RMI and other nonprofits for grant funding to pursue their clean energy goals.

But Gumbs said they still need more clean energy programs, educational resources for residents, as well as access to funds from grant-making entities. To him, the solutions are ready. He said the Caribbean might just be the model that would convince both wealthy nations and the private sector to invest in solutions through climate finance.

“Climate-smart funds provide a vehicle to eliminate a big part of the problem,” Gumbs said. “It’s important to bring people along with these solutions, and we’re going to do it in a way that’s sensitive to the local environment.”