A Small CARICOM State’s Vulnerability to Disasters: COVID Plus a Sustained Volcanic Eruption 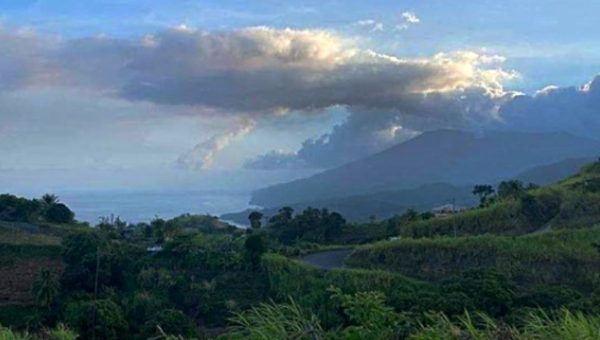 A Small CARICOM State’s Vulnerability to Disasters: COVID Plus a Sustained Volcanic Eruption

The Caribbean is beautiful, but it is fraught with danger. Here in the northern Caribbean, natural disasters are hurricanes, earthquakes, floods, droughts, bush fires and a rare cold spell. In the islands of the eastern and south Caribbean, volcanic eruptions are included. We are now seeing the eruption of La Soufriére on the island of St. Vincent. In the 20th Century, this volcano erupted twice, in 1902 and 1979.  Despite being a history and geography enthusiast, I didn’t know of either. The Jamaican Gleaner did carry short reports about the eruptions which began on April 13, 1979 and lasted through June. It had also reported on the eruptions from May 6 into October 1902.

Volcanoes in the Caribbean islands are visible, potential dangers as the islands were formed by volcanic activity. There is evidence of this activity in nearly all the islands particularly those in the south and east. In Jamaica, our mineral springs, specifically the hot spring at Bath in St. Thomas, is evidence of volcanic activity. Prior to the 1990s, the only Caribbean volcanic eruption I was aware of, was Mount Pelée in the French island of Martinique which occurred on April 23, 1902 destroying the town of Saint-Pierre and killing 29,000 people. I am now learning that just a few days later La Soufriére in St. Vincent also erupted killing 1,680 people. It would erupt again 77 years later in 1979. Note that ‘soufriére’, from the French word for sulphur, soufre, is a common name for volcanoes in the eastern Caribbean, where there was the influence of French language and culture.

I became aware of volcanic eruptions in the English-speaking Caribbean when, after centuries dormant, the Soufriére Hills Volcano erupted in the British territory of Montserrat in 1995 continuing into the 2000s. By 2000, two-thirds of the population of nearly 12,000 had been evacuated and large tracts of the small island had become uninhabitable. Monserrat, a member of the Caribbean Community (CARICOM), saw its gross domestic product (GDP) of EC$122 million in 1995 reduced to EC$16 million by 1999. Today, its population is under 5,000 and, in the shadow of a still smoldering hill, recovery remains an ambition.

In travelling through the region, I have visited some of the volcanic sites, Watten Waven and Soufriére hot springs in Dominica; the Soufriére Volcanic Centre in Saint Lucia driving through the open crater; and, in Trinidad and Tobago, the mud volcano, the Devil’s Woodyard. Dominica has several active volcanic sites and has been exploring the use of thermal energy.

So, last week, 42 years later, St. Vincent’s La Soufriére erupted again spewing thick black smoke and ash over the island. The plumes have extended to other islands including Barbados. With the monitoring of the University of the West Indies (UWI), modern science and past experience, the warnings from the volcano, being issued since December, were heeded. People in the danger zones were evacuated. Reports indicate that scientists are expecting a much bigger eruption in coming days. The 1902 and 1979 eruptions show that this crisis could last for weeks, possibly months.

This eruption also comes in the midst of the COVID-19 pandemic. St. Vincent and the Grenadines, to date, has recorded 1,790 cases in a population of 110,589. The tourist industry, since March 2020, has been crippled by measures to contain COVID-19. A vaccination and testing programme was being implemented in a recovery plan.

In remarks on April 7, Prime Minister Ralph Gonsalves, in an assessment of his country’s economic situation, had said that it might not be possible to pay civil service salaries, national insurance contributions and pensions. For 2020, revenue collection fell by about 30% and the economy contracted by about 5%. The PM signaled that the country was now under real pressure. The economic crisis has worsened and the economic prospects are now mired in deep volcanic ash.

CARICOM has mobilized to assist St. Vincent and the Grenadines through the Caribbean Disaster Emergency Management Agency (CDEMA). Prime Minister Keith Rowley, as CARICOM Chair, pledged regional support to a sister country in its time of peril. Members are providing assistance. It is a time for cooperation.

This situation highlights that CARICOM should have done more in the last 20 years to promote sustainable development and build economic resilience. Regional cooperation should have been accorded higher priority. The international community also played its role. It is again witnessing the vulnerability of small island developing states (SIDS) and why GDP criteria are misleading, which place islands, such as St. Vincent and the Grenadines, in the middle-income category, limiting access to or graduating them from development support.

St. Vincent and the Grenadines needs immediate regional and global assistance in this time of compounded crises.

Volcanoes are not to be taken for granted even when dormant for decades, even centuries. They are sleeping catastrophes. Montserrat is the example. We also cannot forget that hurricane season is less than two months away and it was very active last year. Some countries are still recovering from their previous super blows. Haiti has yet to recover too from its 2010 earthquake. And, COVID and its impact are still with us. It is a very stressful time for all of us.