On Friday (October 1), Prime Minister The Most Hon. Andrew Holness, announced that he will be adding his support to electricity regularization efforts within his constituency. The PM said he will be implementing a $9M house wiring initiative, for residents in St. Paul’s Lane, Ebony Road, and roads leading off, in West Central St. Andrew.  The occasion was the launch of the Urban Electrification Programme, which will see house wiring being carried out by the Jamaica Social Investment Fund and infrastructure work and meter installations by JPS.

The Prime Minister also noted that residents will have to pay for electricity services, and that it was important for government and other stakeholders to work out the way forward for electricity to be available at a reasonable cost to the people.  One of the solutions recommended was prepaid service.  “We must come to a solution that is fair for you and fair for them [JPS]” he added.

Mr. Holness also admonished residents to use electricity conscientiously, “All of the people who have 4 AC and 10 fridges, who just a run dem straight…you must have little conscience… you must have little conscience… because that accounts for why the big transformer blow up and everybody have to suffer for that,” he appealed, to much approval from the audience.  He also warned against throwing up illegal connections, “You see this thing of tying the little stone and the hook and just throwing it up on the wire and then you run it into your house, and then you just connect to it?  That’s very dangerous. The transformers that blow – blow because of that, and that’s why we don’t have the electricity in the community,” he lamented.

He also encouraged residents to consider other matters, such as ensuring that their homes are properly wired – to prevent high bills (through power leakage) and to avoid dangerous situations, particularly for children – adding that he has seen children in the community, who have been burnt as a result of faulty wiring.

JPS Senior Vice President of Customer Services, Ramsay McDonald, also addressed the gathering, noting that it was critical that residents have safe and reliable power supply.  The Snr. VP also informed the group that the Company was recommending the prepaid system for them, as a manageable means to afford electricity.  “We’re putting the control of your bill in your hand.  You pay as you go. You use, you pay and you work with it,” he encouraged.  He also informed listeners about the JPS Grand Bonanza promotion, which will allow new prepaid customers to win attractive monthly prizes and a grand purse of $2M.

JPS has been working in several communities with high theft rates to encourage regularization, as well as to protect equipment from damage due to overloading caused by illegal connections. 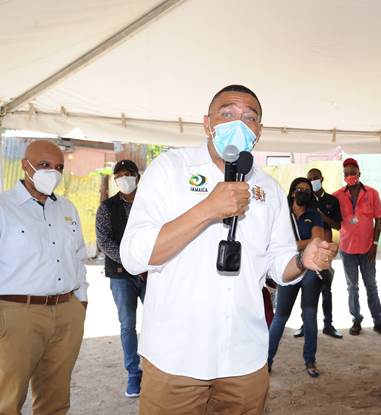 Prime Minister, The Most Hon. Andrew Holness addresses residents of St. Paul’s Lane and surroundings, in his West Central St. Andrew constituency. The occasion was the launch of the Urban Electrification Programme, which will see a $9M investment in house wiring, to promote electricity regularization for residents in the area. 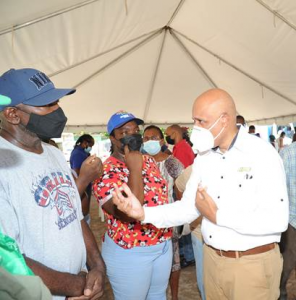