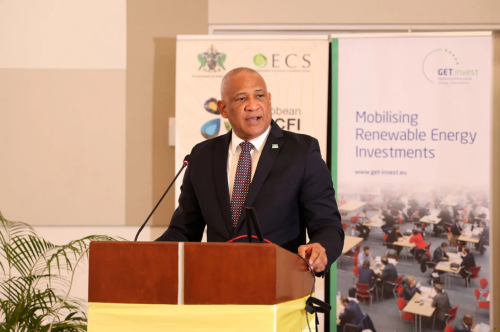 The 2nd NDC Investment Forum – a three-day event hosted by the Organisation of Eastern Caribbean States Commission and the Government of Saint Lucia – concluded on Thursday July 7, 2022. The Forum, held at the Harbor Club Hotel in Saint Lucia, brought together OECS government leaders, policymakers, regional stakeholders, investors, and international partners to discuss the adoption of alternative energy sources, explore the decarbonizing of the Eastern Caribbean, harnessing the power of clean energy, and chart a path for environmental sustainability, while building resilience to the impacts of climate change in several sectors including water, infrastructure, agriculture, mobility (transport), and finance.

The Caribbean Nationally Determined Contributions Finance Initiative (NDCFI) was launched in 2017 with the aim of supporting the efforts of Caribbean countries in meeting their pledges under the Paris Agreement, as well as other complementary climate actions. The NDCFI was established with the support of the United Nations Framework Convention on Climate Change (UNFCCC) through the NDC Partnership, which brings together more than 115 countries, and more than 80 institutions to create and deliver on ambitious climate action that helps achieve the Paris Agreement and the Sustainable Development Goals (SDGs).

Dr. Ernest Hilaire was optimistic about the outcomes of the Forum. However he underscored the need for continued support of this initiative. In his address to the attendees he stated,

“It is my hope therefore, that this forum will provide the means for enhancing the private sector’s ability and capacity to contribute to the meaningful changes, not just at the national levels across Member States, but within the respective sectors in general. We will need to focus on ultimately building financial mechanisms to channel domestic finance and international support for implementation of our indices and other climate commitments across all sectors with all our partners.”

Throughout the three-day event, practical solutions to reducing carbon emissions were explored, such as implementing policies to increase the use of electric vehicles to building more resilient infrastructure to safeguard property and resources. Honourable Shawn Edward noted,

“Looking at the programme for this three-day forum, it is clear to me that we are moving in the right direction – From the Frontline, to the Future: Uniting the Caribbean for Bold Climate Action. There are many front lines these days, but that of climate change requires action that we build resilience across critical sectors such as water, energy, Infrastructure, transportation, finance, to name a few.”

The OECS Director General gave a sobering address with a call to action for participants to make decisive changes to weather the storms – both literal and figurative – ahead.

“In reflecting on the latest scientific projections, I wish that I could truthfully quote from the hit song of yesteryear and say that the “future’s so bright, I gotta wear shades”, but, sadly, the spectre of a climate future ruled by unbridled climate change is far from bright or rosy, even when viewed through the rosiest-tinted of glasses.

“There is an old saying that, if we are not careful, we will end up where we are going. Based on the science and the stark evidence on display around the world – including unprecedented floods, cyclones and droughts – where we are headed appears to be what would once have been considered the stuff of apocalyptic fiction movies. Such a future is the antithesis of a sustainable future and, thus, “the future we don’t want”

“Yet, it is the contemplation of such a future that has galvanised the governments and people of the region to action; to pursue an alternative future- a future founded, not on fatalism, but on resolve and collective action and a belief that, along with a truly willing international community, we can turn the tide against climate change. This is the very reason that the Caribbean NDC Finance Initiative, or NDCFI was established and the very reason that we have chosen the theme of this Forum: From the Frontline to the Future: Uniting the Caribbean for Bold Climate Action.

“In short, to quote yet another song, we are “…living on the frontline..” but we can, and we must, overcome the existential climate threat by transitioning to resilient, low-carbon economies because our future, our very survival, depends on it.”

“International and regional partners affirmed their commitment to the region on the climate change frontline, including the Republic of China (Taiwan). H.E. Peter Chia-yen Chen, Ambassador of the Republic of China (Taiwan) stated that “Taiwan aims to do more than just to expedite our own climate action, but to unite with Saint Lucia, Regional organizations, other international partners to facilitate a more sustainable and resilient future.”

An essential component of the Forum was the NDC Marketplace, an in-person and virtual exhibition of service providers within the private sector that support green and climate-friendly goods and services. The 2nd NDC Investment Forum was supported by GIZ, GET.invest, the European Union, the Global Green Growth Institute, NDC Partnership, the Republic of China (Taiwan), and the Caribbean Development Bank.

The NDC Partnership brings together more than 200 members, including more than 115 countries, developed and developing, and more than 80 institutions to create and deliver on ambitious climate action that helps achieve the Paris Agreement and the Sustainable Development Goals (SDGs). For more information, visit https://ndcpartnership.org/about-us

GET.invest is a European programme which supports investments in renewable energy. The programme targets private sector business and project developers, financiers and regulators to build sustainable energy markets in partner countries. Services include market information, a funding database, matchmaking events and access-to-finance advisory. The programme is supported by the European Union, Germany, Sweden, the Netherlands, and Austria, and works closely with initiatives and business associations in the energy sector. It is implemented by the Deutsche Gesellschaft für Internationale Zusammenarbeit (GIZ). Find out more at www.get-invest.eu.

As a service provider in the field of international cooperation for sustainable development and international education work, we are dedicated to shaping a future worth living around the world. We have over 50 years of experience in a wide variety of areas, including economic development and employment promotion, energy and the environment, and peace and security. The diverse expertise of our federal enterprise is in demand around the globe – from the German Government, European Union institutions, the United Nations, the private sector, and governments of other countries. We work with businesses, civil society actors and research institutions, fostering successful interaction between development policy and other policy fields and areas of activity. Find out more at: https://www.giz.de/en

The Caribbean Development Bank is a regional financial institution, which was established by an Agreement signed on October 18, 1969, in Kingston, Jamaica, and entered into force on January 26, 1970. The Bank came into existence for the purpose of contributing to the harmonious economic growth and development of member countries in the Caribbean, and promoting economic cooperation and integration among them, having special and urgent regard to the needs of the less developed members of the Region. Read more at https://www.caribank.org/

A programme funded by the European Union. The European Union is committed to supporting environmental sustainability and climate resilient development in Latin America. EUROCLIMA+ is a key European response for addressing climate change in the region and it comes at a critical time in which countries are preparing for the implementation of their Nationally Determined Contributions (NDC). Find more at: https://www.euroclima.org/en/

PFAN
​
​The Private Financing Advisory Network (PFAN) is a global network of climate and clean energy financing experts and has been tackling this challenge since 2006, using small amounts of public funding to leverage large amounts of private sector investment for clean energy and climate resilience projects in low- and middle-income countries.

UNFCCC
​
​The UNFCCC secretariat (UN Climate Change) is the United Nations entity tasked with supporting the global response to the threat of climate change. UNFCCC stands for United Nations Framework Convention on Climate Change. The Convention has near universal membership (197 Parties) and is the parent treaty of the 2015 Paris Agreement. The main aim of the Paris Agreement is to keep the global average temperature rise this century as close as possible to 1.5 degrees Celsius above pre-industrial levels. The UNFCCC is also the parent treaty of the 1997 Kyoto Protocol. The ultimate objective of all three agreements under the UNFCCC is to stabilise greenhouse gas concentrations in the atmosphere at a level that will prevent dangerous human interference with the climate system, in a time frame which allows ecosystems to adapt naturally and enables sustainable development.

HM Government consists of the Prime Minister, their Cabinet and junior ministers, supported by the teams of non-political civil servants that work in government departments.

The Republic of China (Taiwan) is situated in the West Pacific between Japan and the Philippines. Its jurisdiction extends to the archipelagoes of Penghu, Kinmen and Matsu, as well as numerous other islets. The total area of Taiwan proper and its outlying islands is around 36,197 square kilometers. At about the size of the Netherlands, but with a population of some 23 million, Taiwan is more populous than three-quarters of the world’s nations. Taiwan proper has more than its share of natural splendor.